VVS Laxman has tweeted a picture of Ashish Nehra taking rest before the match.

Ashish Nehra, Surisers Hyderabad fast bowler, who ripped apart Mumbai Indians with his 3 for 15 in Match 37 of Indian Premier League (IPL) 2016 prepared in a pretty different way before the game as per a tweet by former Indian Test batsman VVS Laxman. The tweet also has an image of Nehra in which the pacer can be seen relaxing. Nehra can be seen taking some rest or probably sleeping over the couch. He is wearing goggles. Laxman jokingly mentioned in his tweet that this is Nehra’s pre-match preparation before his match-winning performance in the game. Nehra broke the backbone of SRH in the match by taking the key wickets of Rohit Sharma, Ambati Rayudu and Jos Buttler. The left-arm pacer’s stellar show helped his team win by 85 runs and earn him Player of the Match award. FULL SCORECARD: Mumbai Indians vs Sunrisers Hyderabad, IPL 2016, Match 37 at Visakhapatnam

Earlier, around 10 days back Nehra had said that he will get better as he gets to play more and more games. “I played after two weeks. The more I will play, I will get better. I was a bit rusty compared to what I was bowling for last six to eight months. So, as more games come up in next one week or 10 days, I will get better from here,” he had said in a post-match press conference after SRH lost to RPS by 34 runs in a rain-hit match. Electing to bowl first, Pune had restricted Sunrisers to a poor 118-8. In response, Pune made 94-3 in 11 overs before rain interrupted the match. Pune won by 34 runs by Duckworth Lewis method.

Laxman said jokingly in his tweet that this was Nehra’s way to prepare before the match. Laxman’s tweet shows the kind of friendly rapport that the two cricketers have with each other. We do not know whether Nehra taking a nap, relaxing or sleeping before the game (as per the tweet) helped him or not  or could it be just a coincidence? Whatever be the reason, Nehra did bowl exceedingly well in today’s game helping his team win by a big margin.

Why Darren Sammy thinks Kieron Pollard will be angry with him 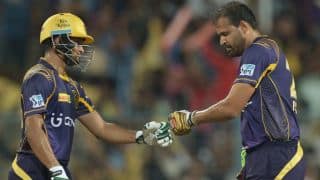