Shimron Hetmyer made quite an impression with his dazzling strokeplay in the first ODI against India.

West Indies batsman Shimron Hetmyer made quite an impression with his dazzling strokeplay in the first ODI against India in Guwahati on Sunday. He recorded his third ODI century, an aggressive 78-ball 106 to push his team to a challenging total.

His innings even drew a reaction from India offspinner Harbhajan Singh who predicted Hetmyer will be the ‘next million dollar baby in the IPL’.

While the 21-year-old is basking in the adulation coming his way, he’s feet are firmly grounded with his first priority being playing regular cricket for West Indies.

“It’s a good feeling to know that one of the great spinners from India has rated me that high,” Hetmyer told PTI on Tuesday. “It is a dream of mine but right now I am taking one step at a time, so I would see what awaits. But right now, I am focused on representing West Indies.

“I think everyone aspires to play in the IPL but first you want to represent West Indies. That is possibly the biggest thing you could possibly do as a cricketer and then you would take it from there,” he further added.

Hetmyer’s assault was timely considering his poor run in the Test series where he scored 50 runs across four innings. Speaking to senior players helped him clear his mind.

“I had a bad Test series, it was not one of the best ways to start a series in India but from there on I tried to forget about that as much as possible and the senior guys helped. They said don’t worry and look forward to the next game,” he said.

“I have quite a few experienced guys to lean on, to know how it was before, even the coach (Stuart Law) who has played for Australia. How much of the big change has happened from then to now. How they played their game.”

The flair with which he batted, comparisons with batting legend Brian Lara were inevitable. “I did look up to Brian Lara when I used to watch cricket, but most of it (shots) comes naturally to me. I am a natural stroke-player and try to play each ball on merit,” he said.

During his interactions with several legends in the past, Hetmyer has received the same advice ‘just be yourself’

“I have spoken to a few legends in the past, they are quite fun actually, easy going — Lance Gibbs, Sir Viv Richards and Brian Lara, Some of the other stars, too. Knowing that they are backing you makes me feel good.

“They tell me to be ‘just be yourself’, they give suggestions like play each ball on merit and all. They try to help in every way possible, make it as easy as possible for us and encouraging us to keep pushing,” he said. 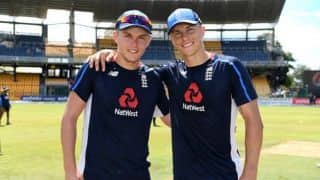