The bench made the observation after BCCI submitted an application.

The Indian Premier League (IPL) auction on Wednesday in Bangalore will go ahead as scheduled, the Supreme Court of India said Monday observing that its decisions would be without prejudice to the order of the apex court in the betting and spot-fixing case.

“Any decision taken in the IPL auction of players should be without prejudice to the order that may be passed by this court,” a bench comprising justices AK Patnaik and FMI Kalifulla said while making it clear that it will look into the response of all stake holders on March 7 on the report of the Committee that inquired into the betting and spot fixing allegations in the last addition of IPL.

The bench made the observation after BCCI submitted that it should hear on March 7 itself an application in which direction has been sought that players’ auction for IPL 2014 should be subject to order passed by it on the report of a committee probing the betting and spot-fixing scam of last championships allegedly involving Gurunath Meiyappan of Chennai Super Kings.

BCCI’s counsel CA Sundaram said if the application is taken up immediately, any observation made by the apex court will have a bearing on the auction taking place on February 12 and 13.

The application filed by Aditya Verma, Secretary of Cricket Association of Bihar, sought an interim order for the BCCI on the IPL auction saying the probe committee will submit a report on the role of Meiyappan, son-in-law of BCCI President N Srinivasan, whose company India Cements owns IPL team Chennai Super Kings.

The application said if the report is adverse to Chennai Super Kings, then the team’s participation in this year’s IPL will be untenable.

“The franchise of Chennai Super Kings may also be liable to be cancelled,” he added.

The Secretary of Cricket Association of Bihar said among various persons, he was also examined by the Mudgal Committee.

Under these circumstances, he said an interim order be passed that auction of players will be subject to order of the apex court on the report of Justice Mudgal Committee in so far as Chennai Super King is concerned so that justice may be done.

The committee submitted its report in three volumes along with 44 volumes of annexures. The bench asked all stake holders to file their response and objections and posted the matter for hearing on March 7. 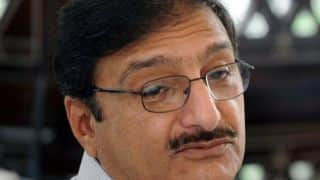