Mohit went to CSK and Shami found a new IPL home in Mohali.

Sharma, who played the last of his 26 ODIs for India in 2015, went to current IPL champions Chennai Super Kings for Rs 5 crore, ten times his base price of Rs 50 lakh. He was previously with CSK when he broke into the Indian team in 2015 under MS Dhoni, but last season played nine matches for Kings XI Punjab from which he managed seven wickets.

Shami, currently in Australia with India’s Test team, was purchased by KXIP for Rs Rs 4.8 crore. He had been released by Delhi Daredevils – now Delhi Capitals – during the off season. 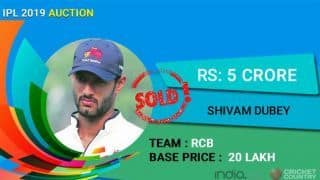