Aaron feels going unsold during the auction was the right thing to happen to him, for it gave the pacer time to introspect where he stood.

It s been almost three years since Varun Aaron last featured in India s Playing XI. The Jharkhand pacer, who burst into the scene for his excessive pace seemed to be developing into an integral part of the team before repeated injuries and lack of form resulted in his ouster. Since making his debut, Aaron has only managed to play nine Tests and nine ODIs.

But while his international appearances were cut short, Aaron remained a constant for Jharkhand in the domestic circuit and the IPL. But it was perhaps because of the seven stress fractures he s had on his back that Aaron went unsold during this year s IPL. Initially calling the development shocking, Aaron feels it was the right thing to happen to him, for it gave the pacer time to introspect where he stood.

It’s been a very nice journey. Ever since I was out of IPL, I’ve enjoyed my cricket, Aaron told Cricketnext. There has just been time to introspect and find more things which work for me. Not playing the IPL just gave me that much more time to think about myself instead of thinking about what’s ahead of me, and what I have to do, how I have to get back into the team and this and that, which is something that’s usually on your mind. That just clouds a lot of thoughts which could be really good for your self-development.

Not playing the IPL was a massive blessing in disguise. I truly believe that was the best thing that happened. For a fast bowler, a cricket journey will be 15-20 years. This was just one small blimp which wouldn’t matter if I achieve my potential and have a killer six-seven years.

After the disappointment of the IPL, Aaron set his sights on County cricket and signed up a deal with Leicestershire, for whom he picked up nine wickets in six FC games, including a six-wicket haul against Glamorgan which helped snap Leicestershire s 19-match winless streak. His tenure was however cut short due to another stress reaction on the foot.

Going to county was more about developing myself and my skill-set, getting to know myself better, he said. Because I hadn’t had a long run of cricket in a long time with injuries and stuff in the past when I played for India. On the contrary, this time I had the time with me, and I’m enjoying my bowling. Basically it was just mental cures which work more than anything else.

The season was good. Sadly I wasn’t there for the whole season but I did whatever I could do best in the time I was there. The win over Glamorgan was massive for the club and contributing to that was a special feeling. When an English club wins a game after 19 games, it’s basically winning a game after an entire season. In the one-dayers I was bowling really quickly. It was a brilliant experience for two months in England by myself, learning a lot about my body. It’s holding me to real good stead at the moment.

But having recovered now, Aaron returned to the domestic fold and played a pivotal role in Jharkhand s road to the semi-final of the Vijay Hazare Trophy. He was the fifth-highest wicket-taker in the tournament a list that is led by teammate Shahbaz Nadeem with 18 wickets from eight matches at an average of 18.05. More importantly, Aaron has successfully maintained the pace that had helped him make waves in the first place.

That won’t change. It’s something I really enjoy. Until I see the ball flying to the keeper and I hear the sound of his gloves… I really enjoy that. If you start worrying about what people are saying, you stop enjoying it.

I was clear in being aggressive from a young age. I’ve never been an in-between person. All or nothing. That’s something I can’t change. Also the fact that I’ve been in MRF pace foundation since I was 14. I had to be away from home since 14 and make my way through everything, get my thinking right.

After so many injuries, you get clarity because it’s a reality check. You’re doing well and suddenly everything comes crashing down. You learn to understand that things aren’t permanent especially in cricket. Can’t take anything for granted. After your career, you’re a human at the end of the day. Cricket is a massive part of my life – nothing comes before cricket, it’s my first love. But at the end of the day, cricket is not a constant. It’s going to change at some point. You don’t know when you’re going to die. You live life to the fullest, and I follow the same for my cricket. I don’t want to reach a point when I’m not enjoying. I’m still enjoying it.

After being nowhere in the past season and a half to getting picked… it wasn’t like I didn’t have wickets in the one-dayers last year, but I wasn’t given a look in. This year I wanted to make a really good case for myself. I’ve been fortunate and worked really hard to be among the top 5 wicket takers in India. Getting a place in the Deodhar Trophy was something I really wanted. I wanted those extra opportunities to prove myself and get back into the (Indian) team at the end of the day.

I feel I have a long journey to go. I have a real belief in myself. That’s why I’m still playing the game. I don’t want to slog on till 35 just playing Ranji Trophy. I want to win games for India. I want to be one of India’s fast bowlers to remember. 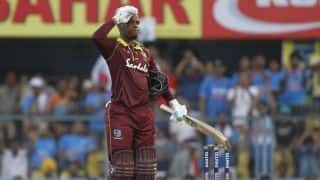