RR and CSK will have to shed out Rs 56 crore and Rs 73 crore respectively per year despite not getting to play in the IPL.

Chennai Super Kings (CSK) and Rajasthan Royals (RR) have reportedly moved court for arbitration against paying the Indian Premier League (IPL) franchise fees to the Board of Control for Cricket in India (BCCI) despite being suspended from participating in the IPL for two years. After the Lodha Committee handed RR and CSK the two-year suspension last year, the BCCI asked them to continue paying the franchise fee in order to remain included in the tournament. Which meant RR and CSK will have to shed out Rs 56 crore and Rs 73 crore respectively per year despite not getting to play in the IPL. FULL CRICKET SCORECARD: Sunrisers Hyderabad vs Kolkata Knight Riders, IPL 2016 playoffs, Eliminator at Delhi

According to Indian Express, CSK manager George John said that CSK moved to the court in April in order to seek a solution for the pay dispute. “Yes, we moved the Bombay High Court in April, seeking to resolve the dispute over the payment of the franchise fee through arbitration. Rajasthan Royals, too, did the same and both arbitration have been held simultaneously. The oral hearings are over but some technicalities remain. So it might take at least another two-three months to reach a verdict,” he added.

Meanwhile, a top BCCI official revealed that both the suspended franchises have paid the first instalment of the fee while protesting against it. “They had paid us the first instalment under protest. They felt it was unfair on the part of BCCI to ask for franchise fees. We had made it very clear that the board will not bear the loss. The image of the BCCI has already taken a big hit after the whole spot-fixing scandal. If they want to remain a part of the league, they will have to continue paying the fees,” the official added. 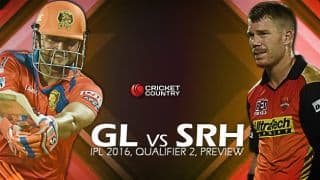