Both CSK and RR have some of the greatest players in the history of the IPL.

While Raj Kundra and Gurunath Meiyappan were suspended for life for any cricketing activities, CSK and RR were suspended for two years. Even though the cricketers are allowed to play for other teams, it will be interesting to see how many really does.
Here is the list of cricketers we may miss in action over the next two IPL seasons!

Suresh Raina – The Chennai Super Kings (CSK) premier batsman is the most run-scorer in IPL. With 3,699 runs and one hundred and 25 half-centuries under his name, he is the most successful batsmen in IPL. Not only that, Raina has played all the IPL matches for CSK till now, since its inception in 2008. His absence may actually help Rohit Sharma overtake him in matches and runs. Rohit has scored 3,385 runs from 128 IPL matches till now.

MS Dhoni – The most successful limited-overs captain, leading the most successful team in IPL, Dhoni will not be part of IPL for sure. Months after IPL 2013 spot-fixing scandal broke out, and rumours of CSK facing the heat made headlines, Dhoni reportedly said that he will not play IPL if CSK is not in IPL. Knowing his loyalty, it will be interesting to see whether Dhoni really plays for another team. No more helicopter shots, at least for the next two years! ALSO READ: What will be MS Dhoni’s next step?

Ajinkya Rahane – The bright future of Indian cricket lies in the hands of cricketers like Virat Kohli and Ajinkya Rahane. The premier batsman of RR, Rahane is one of the most successful players in IPL. The RR opener will be dearly missed, if he decides to not participate or put himself available for any other team. Not to forget he has led India to ODI series win in Zimbabwe! Big blow for the Mumbai lad’s future!

Shane Watson – One of the most sought after all-rounders in the world cricket, the Australian star has been associated with Rajasthan since 2008. Having been part of the IPL 2008-winning team, and also being named as the Player of the Tournament, it will be hard not to see Watson in RR jersey leading the team in the cash-rich tournament! ALSO READ: 5 things that are likely to change following Lodha Panel’s verdict

Steven Smith – The future Australian cricket team captain, Steven Smith had just started blooming with new team, Rajasthan Royals. His previous team, Pune Warriors India withdrew from IPL, just when he started showing promises and now when he is having probably the best time of his cricketing career, his second IPL team has been suspended for two years. What will he do now? 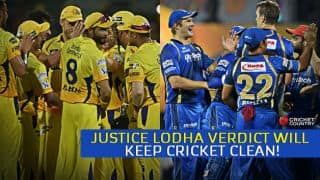