Rest of India put one hand on the Irani Cup after bowling out Mumbai for 409 on Day Three. A rush of blood among their batsmen proved to be Mumbai's downfall as Sachin Tendulkar (140 not out) watched his teammates throw their wickets away. 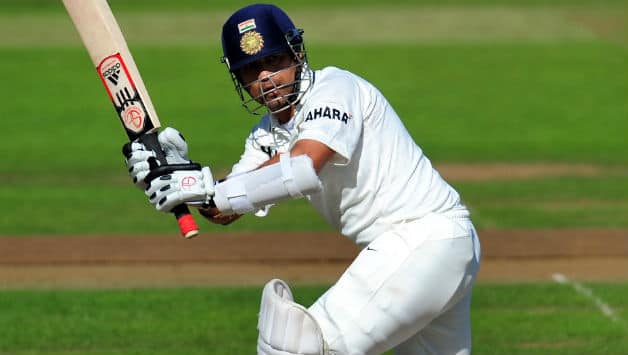 Rest of India put one hand on the Irani Cup after bowling out Mumbai for 409 on Day Three. A rush of blood among their batsmen proved to be Mumbai’s downfall as Sachin Tendulkar (140 not out) watched his teammates throw their wickets away.

After tea, Ankeet Chavan fell one run short of what would have been a well deserved half century after he edged Abhimanyu Mithun to wicketkeeper Wriddhiman Saha. Mumbai were 360 for seven at that stage.

Chavan had forged a face-saving 103-run partnership with Tendulkar and looked disappointed as he headed back to the pavilion, with Mumbai still more than 160 runs behind Rest of India.

Dhawal Kulkarni was the fourth Mumbai batsman to join Tendulkar in the middle. No mug with the bat, the seamer stuck around with Tendulkar for a while and calmly rotated the strike.

Tendulkar, meanwhile, brought about the two shots of the day after having plundered RoI’s bowlers throughout the day. His 16th boundary came off Ishwar Pandey‘s bowling as he punched him down the ground in trademark fashion. The very next delivery was dispatched through the covers for four and gave photographers plenty of clicks. This was vintage Tendulkar.

On 399 for seven, with more than 120 runs to go to surpass Rest of India’s 526, Kulkarni, who was displaying textbook forward defence till then, skied Pragyan Ojha straight into mid-off’s pocket. Unnecessary, just like Rohit Sharma’s (0) shot in the first session.

Javed Khan (8) too didn’t learn from his mates. After slogging two boundaries, he tried to heave Harbhajan Singh over long on, but found Mithun at mid off.

As Ojha scalped last man Vishal Dabholkar for a duck, Tendulkar would have seen hopes of winning his first Irani Cup in more than a decade wash away.

Mumbai skipper Abhishek Nayar,who disappointed with the bat, took a spectacular flying catch at short mid off to send Shikhar Dhawan (0) back without troubling the scorers.

Rest of India reached 27 for one at stumps, leading Mumbai by 144 runs.

This was after Mithun scalped Nayar (1) in the first over after lunch.

As Chavan joined Tendulkar in the middle, the 39-year-old employed a cautious approach, knowing that the tail follows. Mumbai were still 80-odd runs short of avoiding follow on and the little master knew he would have to carry the tail if the hosts were even going to think of a first-innings lead.

Tendulkar, on 66, hit the first boundary of the session, off Pagyan Ojha, through midwicket. He had been targeting the left-arm spinner all day and pounced on a loose delivery.

The boundary opened the floodgates of sorts as Tendulkar and Chavan forged a vital partnership that parried Mumbai past the follow-on mark. Tendulkar took calculated risks and showcased his exquisite timing to race through to the nineties.

As he reached 95, Sreesanth was brought into the attack. The duo had had a good contest in the first session. The Kerala pacer greeted the legend with a short delivery. Tendulkar ducked, but the ball hit his shoulder before carrying to first slip. It must have hurt, but the little master showed no signs of it.

The very next ball was caressed through the covers for four. On 99 now, and the Wankhede crowd on its feet, Tendulkar shaped up to flick Sreesanth’s next off the legs. The ball went to the fine leg fence and brought up loud cheers, only for the umpire to signal leg-byes. Until the next over, then.

Sreesanth began his next over with a short one which zipped over Tendulkar’s head. The following delivery was pitched short too, but straying down the leg. Tendulkar sensed the opportunity and worked it square of the wicket and took the single.

The helmet came off, the bat was raised and the head looked towards the sky, as the Wankhede erupted. It was First-Class ton No 81 for him, which equaled the other little master Sunil Gavaskar’s record. He needed four more to go past 25,000 First-Class runs and obliged in Sreesanth’s next over with boundary straight down the ground.

Rest of India skipper Harbhajan Singh picked two quick wickets before lunch to peg Mumbai back at 255 for five.

Mumbai were looking good with Tendulkar and Ajinkya Rahane sharing a good fourth-wicket partnership, but Harbhajan made the most of a dubious call from the umpire and a brash inexperienced stroke to put his team back on top.

Night watchman Shardul Thakur (4) did his job of keeping Tendulkar safe overnight, but he was gone the first all he faced in the morning. Ishwar Pandey’s away moving delivery found Thakur’s edge that went flying to Manoj Tiwary at gully.

Thakur’s wicket was welcomed by loud cheers from the Mumbai crowd, which could only mean Tendulkar was the next man in.

The homeboy obliged the few hundred loyal fans present at the Wankhede by opening his account with a crisp hit through the covers for four.

Rest of India opened the bowling with Sreesanth and Pandey, both of whom maintained a good line outside off stump.

Sreesanth, who is trying his best to impress the watching selectors, engaged Tendulkar in a fascinating duel. The duo clearly have a history between them and the Kerala pacer added spice to it by trying to bounce Tendulkar out. The little master tried one or two of this trademark upper cuts, but failed to connect.

Tendulkar brought up the fifty of the partnership by emulating his earlier drive through the covers. Mumbai needed these two to deliver and after manoeuvring a testing first spell fro Pandey and Sreesanth, the duo upped the run flow.

After Rahane had swatted Pragyan Ojha for the first six of the morning over the deep midwicket fence, Tendulkar joined in and hit the India left-arm spinner for a straight six and a gentle push to the long-off fence.

Captain Harbhajan had had enough by now and brought himself in with the score on 226 for three in 62 overs. In only his second over, he got Rahane leg-before to what replays showed was a clear inside edge.

This brought an end to a 73-run partnership and perhaps Rahane’s chances of opening the batting for India at Chennai against Australia.

Meanwhile, Tendulkar brought up his half-century by slogging Harbhajan over deep midwicket. The Wankhede crowd, which was swelling by the minute as news of Tendulkar batting spread, went wild.

New man in Rohit Sharma tried the same in Harbhajan Singh’s next, but could only find a top edge that ballooned up in the air and was caught by Ojha at deep midwicket.

Tendulkar would have been furious with the way Rohit threw his wicket away. With a couple of overs to go before lunch, the brashness was unnecessary.