Irani Cup promises to be a good contest between Rest of India and Karnataka.

Karnataka, the Ranji Trophy 2013-14 champions have a task on their hands within days of lifting the premier domestic tournament. They now face a formidable Rest of India (ROI) side, led by the veteran off-spinner Harbhajan Singh, for the Irani Cup at the M Chinnaswamy Stadium, Bangalore from Sunday.

Normally, ROI are too strong and have often beaten the Ranji champions, but given the balance in the Karnataka ranks, it promises to be a good contest.

Karnataka have had a very consistent unit right through the season. Although they had a few players who were laid low by injury, their replacements did a fantastic job. There were players on the bench who were up for the challenge and ready to perform whenever given a chance. One would have felt that they would have gone in with the same side that won the Ranji Trophy final at Hyderabad, but with Stuart Binny back in the side, they are likely to make changes in the playing eleven.

But then, who goes out? The top three are well settled and cannot be moved. Manish Pandey, Karun Nair and CM Gautam form the core in the middle and will hold on to their spots. Which means Amit Verma may have to make way and it is quite unfortunate as he scored a ton in the semi-final and did decently well in the final.

HS Sharath,  is also back in contention and that may mean that Sreenath Aravind may have to sit out as R Vinay Kumar and Abhimanyu Mithun are the frontline options for Karnataka.

ROI have a good side and many options to ponder. This game is very important for them and Harbhajan echoed those sentiments at the pre-match press conference. He said, “Every game is important. These kind of matches — being on TV — everyone is looking to perform to the best of their abilities. Obviously selectors will also be watching very closely. [It is a] great opportunity for the guys from both sides. I am sure everyone’s looking forward to it.”

Gautam Gambhir and Jiwanjot Singh will open the batting, forming a right-left combination. There are questions over the No 3 spot as Natraj Behara, Ankit Bawne and Baba Aparajith are the contenders. Those who miss out on the spot at the top will then compete with Mandeep Singh for the role at No 5. Kedar Jadhav is likely  to bat at No 4 as that is where he has made an impact for Maharashtra.

Lower down the order, Dinesh Karthik would occupy the wicketkeeper’s spot at No 6. Then there is a tussle for No 7 as Parvez Rasool, the all-rounder and leg-spinner Amit Mishra would compete for it. Harbhajan would be at No 8. Then come the fast bowlers. ROI have options in Pankaj Singh, Varun Aaron, Anureet Singh and Ashok Dinda.

Coach Lalchand Rajput did not reveal his choices but said that they will play three seamers. By the looks of things, Anureet may miss out to the three India internationals.

The wicket at the M Chinnaswamy Stadium has a greenish tinge to it and one would back the seamers to get some purchase. Historically, it has always been a good wicket, with something for both departments. Rajput said, “Not looking too much at the pitch, but I can assure [you] it will be a very good game.” 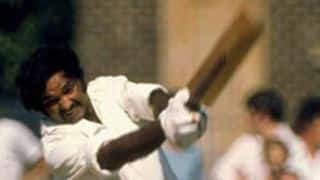