With this victory, the ROI have registered their second consecutive Irani Cup win, beating Mumbai the previous year.

It looks like teams do not mind being in precarious positions anymore, especially when they are reeling at 63 for 4. A few days ago, India staged a remarkable comeback from 63 for 4 to post a victory over England, thanks to Virat Kohli and Kedar Jadhav. As eerie as it may sound, the Rest of India (ROI) emulated the national side s feats within a few day s time. Wriddhiman Saha and Cheteshwar Pujara got together when ROI were tottering at 63 for 4 chasing 379, with the Ranji Trophy champions Gujarat being all over them. Saha and Pujara emulated their teammates in the national side; Saha hammered his maiden double century in First-Class cricket and Pujara reached 116. They added 316 for the fifth wicket, and in the process, helped ROI clinched the Irani Cup 2016-17.

With this victory, the ROI have registered their second consecutive Irani Cup win. The previous year, they had defeated Mumbai. Gujarat, who made it to their maiden Irani Cup gave everything, but could just not find a way past Pujara and Saha, who warmed up for the next 5 Tests for India with the highest-ever partnership for ROI in an Irani Cup game.

Saha remained unbeaten on 203 off 272 while Pujara was 116 off 238. Apart from them, ROI stood out for their bowling brilliance as Siddarth Kaul ended with 8 wickets while Pankaj Singh got 5As for the spinners, Shahbaz Nadeem once again knocked national selectors doors with a 4-wicket haul.

The final day saw several records being achieved by Saha and Pujara. Entering at 63 for 4, Saha got along with Pujara to build mammoth partnership of 316 runs. It consisted of 39 fours and 6 sixes. Pujara had to wait to get to his century as Saha cruised to his 150 off 238 deliveries. Meanwhile, Saha and Pujara went past their 250-run mark in style with Saha s fourth six towards the stands. Pujara, on 98, struck a boundary towards gully to get his 38th First-Class century. In the 99th over, Saha went past his highest First-Class score of 178, and went on to post his maiden First-Class ton.

In the first innings, after winning the toss and opting to bat, Gujarat were in deep trouble losing opening batsman Samit Gohil, Manpreet Juneja and Parthiv Patel in quick succession. Priyank Panchal and Dhruv Raval provided the early push with their 55-run partnership for second wicket. However, it was Chirag Gandhi s maiden First-Class century that lifted Gujarat from deep trouble. Gandhi also held steady partnership with Juneja, Karan Patel and a century stand with Hardik Patel. He smashed 18 fours and a six to take Gujarat to 300-run mark on Day One.

ROI bowlers also played their part. Pankaj Singh and Siddarth Kaul shared 9 wickets to fold Gujarat to 358. Gujarat added 58 runs to their overnight score of 300 on Day Two with Kaul ending with figures of 5 for 85 and Gandhi remaining unbeaten on 169..

In response, Pujara ploughed a lonely furrow and made a fighting 86 against Gujarat as the rest of the batsmen struggled. Although he got a steady partnership with Akhil Herwadkar of 68 for second wicket, ROI struggling at 206 for 9, managed to add just 20 runs to their overnight score and were dismantled for 226. Pujara struck 9 fours to get to 86. Among the Gujarat bowlers, Chintan Gaja was the pick with 4 wickets while Hardik supported with 3 wickets to hold command over ROI.

Mohit Thadani also bowled a fine spell where he picked Manoj Tiwary and Saha for a duck, ending with figures of 2 for 48.

Gujarat, who got 132-run lead bundling ROI for 226, added 247 runs for second innings, thus setting target of 379 to win against ROI. Panchal and Gandhi s fifties took Gujarat beyond the 200-run mark. The only talking point of Gujarat s batting was Panchal and Parthiv s third-wicket stand of 85. However, Pankaj grabbed Panchal for the second time in the game for 73.

Among the spinners Nadeem was at the top with 4 wickets of Parthiv, Thadani, Karan, Gaja. Part-timer Herwadkar also got a wicket on Day One before heading for tea. Kaul was also the driving force for ROI to maintain an upper-hand over Gujarat.

Hunting the target of 379, ROI slumped with four early wickets of Nair, Herwadkar, Mukund and Tiwary, with Hardik shining once again with 2 wickets while Thadani and Karan getting a wicket apiece. However, Pujara and Saha s heroics ensured they changed the fortunes for ROI and maintain their defending champion tag. 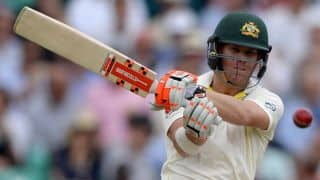 India vs Australia: David Warner happy to be rested ahead of tour