Wasim Jaffer registered the highest score against Rest of India in Irani Cup history. He went past Surinder Amarnath’s 235 not out that remained a record for almost 38 years. Leading Delhi, Amarnath had batted for 10 hours against an attack consisting of Kapil Dev, Karsan Ghavri, Roger Binny, Dilip Doshi and Shivlal Yadav. During the course of the innings, Jaffer became the leading run-scorer in the history of Irani Cup, became the ninth to register a double-hundred in the tournament, the sixth Indian to reach 18,000 First-Class runs, and the fourth-oldest Indian to score a First-Class double-hundred. He now has the third-highest score in Irani Cup. The list is topped by Murali Vijay (266), followed by Pravin Amre (246).

Vidarbha reached 504 for 2 at the time of publishing this piece. Jaffer and Ganesh Satish had put up an unbeaten stand of 286 for the third wicket against a Rest of India attack led by Ravichandran Ashwin. 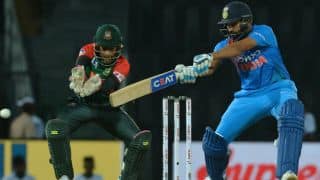