The Parthiv Patel-led Rest of India start as firm favourites against a disjointed Rajasthan outfit as the two teams square up for the Irani Cup match at the Sawai Mansingh stadium starting on Saturday. 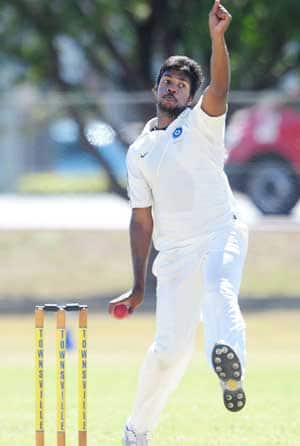 The Parthiv Patel-led Rest of India start as firm favourites against a disjointed Rajasthan outfit as the two teams square up for the Irani Cup match at the Sawai Mansingh stadium starting on Saturday.

The start of India’s first-class season is pretty significant with as many as seven players who are likely to feature in the Rest of India’s first XI have been selected to play against England for the first two ODIs.

While the likes of Parthiv Patel, Ajinkya Rahane will like to have a decent hit in the middle, the three quicks Varun Aaron, Umesh Yadav and Ranganath Vinay Kumar would be keen on bending their backs on a strip that might assist seamers.

Leggie Rahul Sharma who has proved his mettle in the shortest version would also like to show his temperament in the five-day format where doesn’t have a great record.

For Abhinav Mukund, it will be another chance to remind the selectors about cementing his claim for the reserve opener’s berth in Test team. Mukund has fond memories of this ground having scored 161 during the last edition of Irani Cup.

Ditto for Ravindra Jadeja who had some good performances at this ground while playing for Rajasthan Royals during the first edition of IPL.

The very talented Manish Pandey also needs to get big score to be in scheme of things.

Although Rajasthan have managed to retain the core of the squad, their preparation hasn’t been upto the mark. It’s been a sort of a rag-tag outfit and the murky politics of RCA didn’t help the team’s cause either.

The new-ball bowlers Pankaj Singh and Deepak Chahar have had injury problems with the senior pacer being ruled out due to knee problem. Even Chahar, who grabbed eight wickets on his debut is not 100 percent as he has split the webbing of his palm.

Much will depend on how the veteran trio of skipper Hrishikesh Kanitkar, Aakash Chopra and Rashmi Ranjan Parida and young Ashok Menaria bat. Parida and Menaria though are returning from injuries and can’t exactly be termed match-fit.