It was a day dominated by the bowlers as the Rest of India (ROI) clashed with Karnataka for the Irani Trophy 2013-14 at the M Chinnaswamy Stadium, Bangalore. R Vinay Kumar, the Karnataka skipper was the pick of the bowlers on the day as his remarkable spell of six for 47 set the tone for his side and eventually bundled out ROI for 201. The batsmen had a tough time and that is why Dinesh Karthik will savour his effort of 91.

If you looked at the square at the Chinnaswamy Stadium, you would have been stunned to see the amount of grass on the surface. In fact, it was a touch difficult to pick the main wicket had the stumps not been put in the lead-up. The bowlers would have licked their lips with the prospect of bowling on this green track and Vinay Kumar instantly chose to bowl when he called it right at the toss. Karnataka were bolstered by the return of Stuart Binny and HS Sharath and the duo replaced Amit Verma and Sreenath Aravind.

Early in the morning session, the track showed its true colours and Vinay Kumar used it to good effect. Jiwanjot Singh, Baba Aparajith and Kedar Jadhav were flummoxed by the movement early on and were all trapped leg-before as ROI were reduced to 12 for three. That brought Karthik to the crease and he nearly faced an early exit when an appeal for an edge was turned down.

To understand Vinay Kumar’s effect on the day, one must bring his first spell into perspective, one that lasted for over an hour. His figures read an impressive 8-3-18-3.

Karthik and Gautam Gambhir were circumspect. Gambhir, wanting to prove a point, was leaving well outside the off-stump although a few that moved in troubled him. Stuart Binny was then brought on. With the keeper standing behind, he was bowling a little quicker and was trying to pitch it up, getting the ball to move into Gambhir. There were a close shouts.

Ultimately, one felt that Gambhir was moving too far across at times and was dismissed leg-before when Binny slid one in and had him leg-before. Mandeep Singh fell soon after as he edged one to the slips off Binny. With 62 on the board, ROI had lost half their side.

Amit Mishra, selected ahead of Parvez Rasool, had a tough task on his hands. However, it was against this team that he had scored his only First-Class double. There was only one way he was going to bat and that was attack. In a way, it allowed Karthik to settle down, essaying those drives with panache and punishing anything short and wide.

Mishra scored 47 in quick time and put the spinner out of the attack by smashing him instantly. In the afternoon, it looked like the conditions had eased out as Mishra made run-scoring look easy before he was dismissed. He chased a wide one and spooned a catch to the slips, a dismissal that was his own doing more than the good bowling.

But, Karthik looked steady, essaying a few crunchy shots through mid-wicket and mid-on. With Harbhajan Singh looking comfortable at one end, the century may have been on his mind. However, Harbhajan lives by the sword and dies by it and he offered an easy catch to square-leg. That was where the collapse started.

Karthik then thought  he could take matters in his own hands as he swiped across the line and tried to go over mid-on. He didn’t get all of it and Robin Uthappa, standing a bit square at mid-on, threw himself to his left and took a magnificent catch. ROI lost their last four wickets for three runs and Vinay completed his six-for in the process.

Ashoke Dinda started off very well for ROI as he had Uthappa caught at first-slip in the first over. But then, Ganesh Sathish and Lokesh Rahul, the pair who dominated the Ranji Trophy final saw it through to the end of day’s play. Rahul essayed those gracious drives off the front-foot to blood in some confidence. Karnataka finished the day on 35 for one. 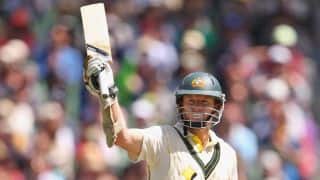 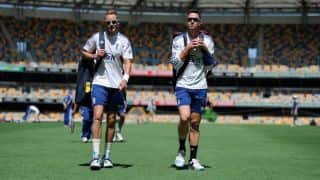