Catch Live updates of the Day Four of the match here.

Hello and welcome to the Live Blog of Day Four of the Irani trophy match between Karnataka and Rest of India. Karnataka have dominated the match for three days and are inching closer to a victory. Karnataka will begin Day Four with a massive lead of 291 runs and just seven wickets to pick. It was a day where Karnataka simply built on their advantage and surged way ahead. A matter of time before they have their hands around the Irani Cup. 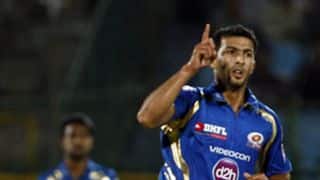