R Vinay Kumar leads Karnataka pacers in bowling out Rest of India for 201.

Rest of India (ROI) have been bowled out for 201 by Karnataka on Day One of the Irani Cup game against Karnataka at the M Chinnaswamy Stadium, Bangalore. On a green deck, the Karnataka seamers dominated and only a fightback from Dinesh Karthik and Amit Mishra helped ROI get to their eventual score. For Karnataka, skipper R Vinay Kumar led the way and his initial burst set the tone for them.

Looking at the deck at the Chinnaswamy Stadium, one could say that the grass on the wicket was a shade lighter when compared to the square. Thus, Vinay Kumar had no hesitation to bowl first when he called right at the toss.

The day began in dramatic fashion as Jiwanjot Singh was trapped leg-before off the very first ball of the day. A few overs later, Baba Aparajith was done in by one that came in and hit him on the pads. Kedar Jadhav was beaten completely and was hit on the back-leg. Vinay Kumar had reduced them to 12 for three in no time.

That was when Karthik walked in and survived an early shout. The ball pitched on line and moved away, shaving past his bat. There was a faint edge, but the umpire ruled it not out. Vinay Kumar was on his knees appealing for that one.

In tandem with Gautam Gambhir, Karthik helped take ROI past 50. But then, Stuart Binny was in play as he moved it into Gambhir, who had walked too far across and was leg-before. Mandeep Singh was then caught in the slips as ROI lost half their side in the first session.

As the afternoon session commenced, the pitch had eased out and the batsmen did well. Mishra attacked with panache, pulling the fast bowlers and also attacking Shreyas Gopal, the spinner. Karthik cut and drove with elan.

Mishra was dismissed for 47, but Karthik continued and strode towards his ton. There were many shots that showed he was in good form. An on-drive off Abhimanyu Mithun was hit with great timing and that was most impressive during the afternoon session.

The evening session started with Harbhajan Singh and Karthik moving quite confidently. Karthik was picking the boundaries and grew in confidence. But, once Harbhajan spooned a catch to square-leg, the collapse started.

Soon after, Karthik tried to hit across the line to mid-on, where Robin Uthappa flung himself to the left and took a magnificent catch mid-air. Vinay Kumar then snared the last two wickets to complete his six wicket haul. 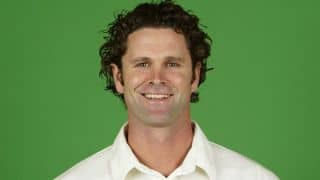 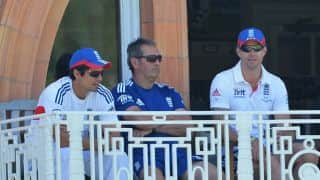