Lorcan Tucker and Josh Little are in line for their Ireland ODI debuts at Malahide on Friday.

Gary Wilson, the veteran wicketkeeper-batsman, has been recalled to Ireland‘s squad for the one-off ODI against England at Malahide on May 3.

The 33-year-old could not tour India for the full series of Afghanistan in Dehradun this year on account of an eye problem, but is now back as is the allrounder Stuart Thompson.

Friday’s one-off ODI between Ireland and England is their tenth meeting.

“The return of Gary Wilson to the squad is a boost, adding lower order experience, and Stuart Thompson’s all-round seam bowling gives us options,” said Andrew White, Ireland’s chairman of selectors. “We have been delighted to watch the continued improvement of Josh Little and Lorcan Tucker.

“Josh gives us that left-arm pace variation and he has continued to impress with some consistent performances – we believe he can transfer his T20 skills into the one-day arena. As for Lorcan, fans of Irish cricket have seen some stellar performances by him over the first few months of the year. While he has been on our radar and around the senior squad in recent times, we’ve started to see greater confidence and consistency in his approach.”

Ireland will retain the squad for the first-half of next month’s tri-series against West Indies and Bangladesh. 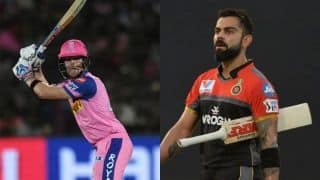 VIDEO: It's Kohli vs Smith as RCB look to oust Royals