It was a good all-round effort in the field from Ireland that saw the hosts restricted to 116 for eight.

Ireland added to their list of giant-killing victories with a six-wicket win over champions West Indies in the first Twenty20 International (T20I) at Jamaica’s Sabina Park on Wednesday.

It was at the Kingston venue where Ireland dramatically defeated Pakistan on a St. Patrick’s Day 50-over World Cup game back in 2007.

And seven years on from that success, Ireland — the leading non-Test cricket nation — upset one of the sport’s ‘big boys’ once again, with former England batsman Ed Joyce making a decisive 40 not out.

After the West Indies won the toss and batted, a good all-round Ireland effort in the field saw the hosts restricted to 116 for eight in their 20 overs.

Ireland, coached by former West Indies batsman Phil Simmons, collapsed to eight for two in reply, losing both openers cheaply, before Joyce, the captain of English county side Sussex, and Andrew Poynter steadied the innings.

Joyce’s runs came off 49 balls, and it was left to O’Brien — just one of two survivors from the Ireland team that beat Pakistan at Sabina Park in 2007 — to hit the winning runs as the Irish finished on 117 for four with five balls to spare.

“It was obviously brilliant,” said Joyce as Ireland took a 1-0 lead in the two-match series ahead of Friday’s second T20I at Sabina Park and a stand alone 50-over One-Day International (ODI) game there on Sunday.

“It was a bit of a strange atmosphere but the nice thing is that we weren’t jumping around like we’d won the World Cup.

“The bowlers set it up and we are all thrilled.”

Joyce said West Indies’ abundance of power hitters and some skilled bowlers led by spinner Sunil Narine made them “scary” opponents in this format.

“They have a lot of power — Chris Gayle, Dwayne Smith opening up, and Marlon Samuels. They also have the best T20I bowler in the world in Narine.”

Joyce, who helped Ireland recover from eight for two after both openers went cheaply, added: “They are a fairly scary team to play against but we know we’ve got a chance to beat anyone when we play well on our day.”

West Indies captain Darren Sammy said his men had been beaten by the “better team”.

“Ireland played well and deserved their victory,” the all-rounder added.

“We were a bit rusty and they came hard at us and in the end were the better team on the day.

“We can’t make any excuses….They bowled well against us and we just didn’t handle it as we should have.”

Next month sees the West Indies defend their global title at the ICC World T20 2014 in Bangladesh — a tournament where Ireland’s first match is a St Patrick’s Day clash against Zimbabwe on March 17.

Man of the Match – Ed Joyce 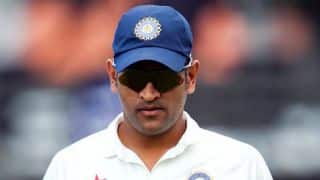