Ireland tested New Zealand in their previous meeting in the ongoing Tri-Nation series to the hilt.

Ireland tested New Zealand in their previous meeting in the ongoing Tri-Nation series to the hilt. Nonetheless, Kiwis emerged victorious by 51 runs courtesy their resilient batting approach and despite Niall O Brien s lone fight with the bat. After their series opener was washed out against Bangladesh, the hosts were expected to come hard against the Asian side on Friday. However, Ireland succumbed to past flaws and posed no threat to Mashrafe Mortaza s side. The tourists hammered the Irish camp and earned an 8-wicket victory at Dublin. With back-to-back defeats, Irishmen have a humongous task to challenge the table-toppers, the Black Caps, in the fifth ODI of the series. FULL CRICKET SCORECARD: Ireland vs New Zealand, 5th ODI at Dublin

Tom Latham s side are leading the points table with 8 points. Bangladesh are just 2 points behind, whereas Ireland are stuck with 2 points. If Ireland manage to upset Kiwis rhythm, they will be tied with Bangladesh at 6 points. However, due to their consecutive drubbings, Ireland will have to wait for other results to fall in their place to progress in the finale. For Ireland to make it to the final, they will need New Zealand to defeat Bangladesh by a huge margin.

This looks like a steep task for William Porterfield s side who has been a victim of repeating similar follies. Ireland s bowling has looked good in patches, but never managed to contain pressure for long. In the batting department, the likes of Paul Stirling, Gary Wilson, Porterfield and Kevin O Brien have been a big disappointment. In the last tie, none of the batsmen applied themselves and fell prey to poor shot selections. Ireland need to resort to the basics to post a respectable score on board. BAN trounce IRE 8 wickets in 4th ODI of Tri-Nation series

On the other hand, New Zealand have performed well despite the absence of big names. George Worker and Neil Broom have taken the responsibility in the middle order. Mitchell Santner and James Neesham have kept it tight with the ball from their ends. The inexperienced campaigners in Hamish Bennett, Seth Rance and Scott Keggelejin, have impressed as well. They will be confident of marching forward into the summit clash without dropping a single game.

For now, it certainly looks like a no-match for the Black Caps. New Zealand have been disciplined whereas Ireland have been erratic, to say the least. NZ’s Hamish Bennett relishes return to international cricket 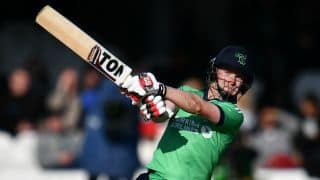