Earlier Scotland won the toss and as expected decided to field first on foggy morning in Dublin.

Majid Haq, the experienced off-spinner takes took the first five-for for his career and his crucial five wickets which helped Scotland to get the upper hand in the third One-day International (ODI) against Ireland at the Village ground in Dublin. The visitors restricted to a moderate score of 241 for nine in their allotted 50 overs. At one point of time even this score was looking too far away for the Ireland but John Mooney‘s aggressive 96 of 77 balls helped the the hosts to reach a fighting total.

Mooney, who recently admitted that that he was suffering with depression due to “unresolved childhood trauma,” came to wicket when his team were struggling at 95 for four in the 28th over. His quick-fire knock was decorated by 12 fours and two sixes. He got out in the second last ball of the innings trying to hit Safyaan Sharif out of the park. Apart from Mooney, captain Kevin O’Brien played a handy knock of 36 for the hosts.

Among the Scotland bowlers, Maq was most successful. Two of his five wickets came in his very first over of the match when he got Stuart Thompson caught behind and trapped John Anderson in front of the wicket. His final bowling analysis were, 10 overs no maiden, 54 runs and five wickets. Apart form him debutant Sharif took two wickets for 44 runs.

Earlier Scotland won the toss and as expected decided to field first on foggy morning in Dublin. The match was delayed by 45 minutes due to wet outfield. When eventually the match started the Scotland bowlers managed to keep Irish batsmen on check. Ireland reached 187 for seven after 44 overs. 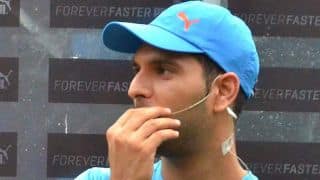