Ireland enter the contest against South Africa as underdogs.

Ireland and South Africa will lock horns in the 24th match of the ICC Cricket World Cup 2015 at Canberra. This Pool B game is going to be very crucial not only for both Proteas and the Irish but also for the other teams of this group who are in the race to qualify for the quarter-final.

Ireland started their World Cup campaign with a convincing win against West Indies and are one of the three unbeaten teams in this tournament. William Porterfield‘s boys have played some excellent cricket in the tournament and looked like a settled unit with lot of depth in their squad. Their performance reflects in the Pool B points table as well where Ireland are sitting pretty in the no. 3 spot with four points. A win against South Africa will almost secure their place in the last eight. But on Tuesday they will start as underdogs. ICC Cricket World Cup 2015: POINTS TABLE

The bulk of the responsibility will be on their batting, which has done remarkably well so far. Most of the batsmen are in good touch and have scored important runs when needed. Senior pros like Ed Joyce, Kevin O’Brien, Paul Stirling have had decent outings. The Irish bowling, on the other hand, looks bit patchy. In both their previous games, their bowlers allowed the oppositions score big, after having tight grip on them in the initial overs. Against the likes of AB de Villiers, Faf du Plessis, David Miller, Hashim Amla, this attack will face a huge challenge. ICC Cricket World Cup 2015: SCHEDULE & MATCH DETAILS

South Africa will look to put up another professional performance. But Keeping Ireland’s capability of giant killing in mind, they should not take them lightly. In this game, South Africa ideally want their struggling top order to spend some time at the crease.  Openers Quinton de Kock and Amla need to give them a good start. This is one of the key issues they will look to resolve from this game.

In the bowling department, apart from the game against India, the bowlers have performed quite well, Imran Tahir, especially has restricted the betsmen from scoring freely in the middle-overs. This helped de Villers to control the game. ICC Cricket World Cup 2015: Complete Coverage

After the victory against the West Indies, their campaign is back on track. But de Villiers and co. will look to continue their momentum. The Proteas will most probably go in with an unchanged side, which means Farhaan Behardien will keep his place ahead of Wayne Parnell, who had poor game against India. At Canberra, toss will be curial once again as it is going to be a day-night game. Batting first is looking like the safer option. 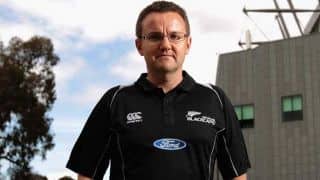 Rangana Herath should not be rushed back into action in ICC Cricket World Cup, says Muttiah Muralitharan