Paul Stirling was adjudged Man of the Series.

After a humiliating defeat in the series opener, Ireland learned from their mistakes to defeat Afghanistan by 5 wickets and claimed their maiden bilateral series over the opponents. Asked to bowl, Ireland restricted Afghanistan for 177, and rode on Paul Stirling’s 101.

Afghanistan openers, Javed Ahmadi and Noor Ali Zadran, started well. Nonetheless, Tim Murtagh and Boyd Rankin removed both batsmen. From thereon, Irish bowlers applied the brakes on the scoreboard and maintained pressure. Their bowlers exhibited another valuable effort as a unit. George Dockrell’s spell, 4 for 28, proved to be the turning point. He got rid of Mohammad Nabi and set batsman Rahmat Shah. Barry McCarthy also contributed with a 3-for, dismissing Rashid Khan and Shafiqullah Saifuddin.

Stirling walked away with the Man of the Match and Man of the Series awards. He scored 188 runs and picked up a wicket in the series. 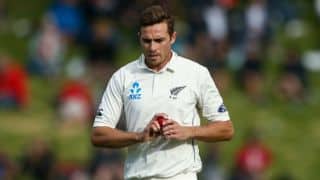