IS Bindra shared two instances when the apparent 'vultures' attacked his integrity, professionalism and commitment to the sport during his reins in Indian cricket's administration.

One of the chief architects of Indian cricket’s functioning, Inderjit Singh Bindra has come out lashing against former Board of Control for Cricket in India (BCCI) Presidents N Srinivasan and Anurag Thakur, in his recent blog. He cricitised the overstay of both the former Presidents and asked fans to come together to avoid giving the ‘vultures’ of Indian cricket from targeting their next meal. Bindra, a former BCCI President himself, also shared the shortcomings he went through during his stint. He also served as the President of Punjab Cricket Association (PCA) from 1978 to 2014. In 2015, he was elected as PCA’s chairman.

Bindra shared two instances when the apparent ‘vultures’ attacked his integrity, professionalism and commitment to the sport. In 2000, he was accused of ‘bringing the Board into disrepute’ when shortly after former South African captain Hansie Cronje s confession, he exposed match fixing in Indian cricket. Recalling the second such instance, he stated, “My rivals in the BCCI managed through political influence to open an investigation against me for obtaining land for the PCA stadium in Mohali. Fortunately for me, the CBI vindicated my position and it was upheld all the way to the Supreme Court.”

In 2013, when Indian cricket was again engulfed by the Indian Premier League (IPL) match fixing controversy, Bindra was shocked to see then President, Srinivasan, continue donning his role. Bindra stated, “He should have persuaded to or forced to resign immediately. This would have allowed a fair investigation into the affairs of his son-in-law Gurunath Meiyappan, and also restored public faith in the game. But Srini (Srinivasan) treated the Board as his own jagir and opened the doors to court intervention in a gentleman s game.”

The story did not end here as Srinivasan was elected as President of Tamil Nadu Cricket Association (TNCA) in 2016. What fumed Bindra the most was when a meeting held in Bengaluru, last year organised by Srinivasan, to ‘provide leadership’ and look at ‘overall interests of the BCCI’ and it associations. He was not at all impressed with Thakur attending the meeting who, and wrote, “He had a memory loss about his differences with Srini (Srinivasan), and attended the meeting along with former secretary Ajay Shirke.”

He added, “How hyenas and vultures can sometimes sit together to share a meal is truly beyond my comprehension and perhaps even the laws of nature. But, it seems all sorts of unholy alliances are still possible in Indian cricket. Yet again, I call on cricket fans to be on guard against vultures gaining a back door entry into Indian cricket through their agents or proxies.”

Bindra concluded by saying, “We all need to support Indian cricket s new Supreme Court administrators. They need all the strength they can get to deny the vultures their next meal.” 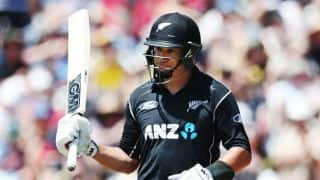