IS Bindra: Surprised to find that N Srinivasan had the gall to say I did not ask for his resignation

IS Bindra: Surprised to find that N Srinivasan had the gall to say I did not ask for his resignation

Terming the BCCI's emergency meeting at Chennai a "farce", former Board chief and Punjab Cricket Association (PCA) president IS Bindra on Monday said that his crusade against wrongdoings would continue. 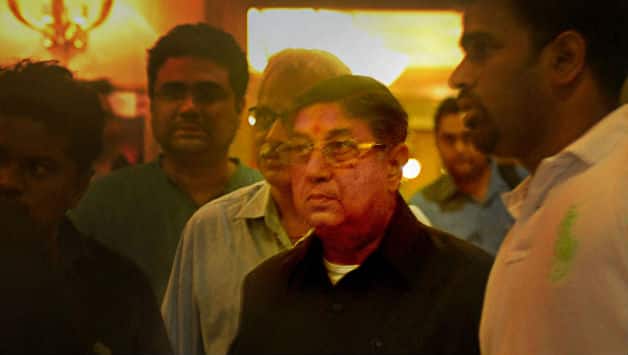 Terming the BCCI‘s emergency meeting at Chennai a “farce”, former Board chief and Punjab Cricket Association (PCA) president IS Bindra on Monday said that his crusade against wrongdoings would continue.

“It is a difficult fight but then other sports internationally have, to a large extent, succeeded in battling the monster. It has to be a relentless fight and it has to be fought with conviction and zero tolerance,” Bindra was quoted as saying on his website, www.isbindra.com.

Bindra claimed that many members at the meeting felt that the best course for Srinivasan was to quit as a first step to restore peoples’ faith in the game in general and the Board in particular.

“They were only left whispering whereas I stood up to tell Srinivasan more than once during the meeting that he should gracefully quit. I am surprised to find that Srinivasan had the gall to say that I did not ask for his resignation! The members who attended the meeting should now stand up and say who was telling the truth, Srinivasan or me,” Bindra added.

He said that a majority of cricket fans were disappointed with the outcome of the so-called emergency meeting of BCCI’s working committee on Sunday.

“I can only offer my sympathies to them [fans]. Frankly, at the end of it all, I had a sinking feeling and felt why at all did I travel down south in this excruciating heat, catching a flight at six,” Bindra said.

He said that it was a colossal waste of Board’s money and time of the members as well as of the huge posse of media which waited in anticipation to hear something more tangible than “a drab statement issued from Delhi by the board’s joint secretary who, along with two other politicians did not think the meeting was important enough to fly down to Chennai”.

“After the meeting I can only construe that the Board’s image has taken a beating and in all my years of association with it I have never seen its reputation plummet to rock bottom,” Bindra said while elaborating the proceedings of yesterday’s meeting.

He said that soon after calling the meeting to order, Board president N Srinivasan shocked the gathering by saying that the meet was an “informal one as a board affiliate questioned its validity since the mandatory 72 hours notice was not given as required under the BCCI constitution”.

Bindra said in Sunday’s meeting a series of steps were initiated violating the Board’s constitution.

“The first and foremost was the constitutional validity of asking my best friend Jagmohan Dalmiya to manage the day-to-day affairs of the board in the absence of president N Srinivasan who reluctantly agreed to step aside, refusing to step down.

“The BCCI constitution has no provision for an interim or acting President and how could an eminent legal brain like Arun Jaitley propose Jaggu’s name in violation of board’s constitution,” he said.

He said that the second shocker, regarding the constitution of the probe panel to inquire into the alleged spot-fixing abd betting scandal involving Srinivasan’s son-in-law Gurunath Meiyappan, followed soon.

“Any probe panel must be fair, independent and lawfully constituted with specific terms of reference. No one in the board seemed to know who actually constituted the panel and I wanted to find out which organ of the board chose the members of the panel.

“After repeated requests to elicit the information, I was told not by President but another official that the probe panel was selected by the IPL Operations Committee comprising Sundar Raman (CEO, IPL), Peter Griffiths (IMG), Rahul Mascarenhas (BCCI legal assistant) and PR Raman [BCCI legal adviser and the brother of Meiyappan’s counsel]. I was told that Prof. Ratnakar Shetty acted as convener for the panel,” he said.

Bindra said that the appointment of the probe panel is ‘void ab initio’ [to be treated as invalid from the outset] because the committee had no power or authority under the BCCI regulations to appoint such a panel.

He said that the power of appointing a panel to take decisions regarding serious matters like spot-fixing, match-fixing and violation of franchise contractual obligations is vested with the Board’s working committee.

Bindra said that realising that public memory is short, he insisted on recording his dissent on all the issues.

“I also suggested that the only competent authority to take these important decisions is the Special General Meeting,” Bindra said.

He said that he suggested a number of steps to restore people’s faith in the BCCI.

The steps, he said included, Srinivasan must resign till such time the investigation and the probe reaches its conclusion, probe has to be fair and independent and the people on it must be of impeccable repute, go into the whole gamut of issues relating to corruption in cricket and putting in place proper checks and balances at the domestic level coupled with strict vigilance and exemplary punishment at all levels.