Ishan Porel could only play the last three matches of ICC U-19 World Cup due to advanced treatments in New Zealand.

Indian medium-pacer Ishan Porel played the final three knockout matches of the ICC U-19 World Cup despite not having fully recovered from a foot injury, his coach Bibhash Das said on Saturday.

“It’s was not exactly an ankle injury. He has a tear on the outstep of his left leg. It’s only because of the advanced treatment in New Zealand that he could play in the final three matches. Such a kind of injury would normally take a minimum three weeks to recover. He had a tissue rupture and put an insole in his shoe before bowling,” Das told the medai here.

The coach added that Porel, who hails from Chandannagar, a town in Howrah district 52 kilometres from Kolkata, should rest now and not play the upcoming Vijay Hazare Trophy domestic one-day tournamnent for Bengal.

“He bowled with pain in his foot and is yet to recover fully. I suggest he should not be playing the Vijay Hazare Trophy or at least not the first few games. He needs time to heal,” Das opined.

India, who have been unbeaten throughout the ICC U19 World Cup, rode on opener Manjot Kalra’s unbeaten 101 to thrash Australia by eight wickets in the final at Tauranga in New Zealand. Electing to bat after winning the toss, Australia rode on Jonathan Merlo’s steady 102-ball 76 — laced with six boundaries — to set up a modest 216-run total.

In their chase, India faced little difficulty as Kalra steered the chase along with wicketkeeper Harvik Desai 47 (not out), reaching the target in 38.5 overs.

Porel had shot to the limelight during the semi-final against Pakistan when he snared four wickets for just 17 runs in six overs. Chasing 273 for victory, Pakistan were bundled out for a paltry 69.

“He was brilliant in that match. Coming back from an injury, he played against Bangladesh but to take four wickets against Pakistan speaks volumes about your talent and strength. He broke down after that injury. I spoke to him at length during that time and tried to divert his mind. I kept motivating him,” Das said.

After bowling just 4.1 overs against Australia in India’s opening Group B match, Porel got injured and had to leave the field.

He was unable to play in India’s other group matches against Papua New Guinea and Zimbabwe before returning to action in the quarter-final against Bangladesh.

Porel did not get a wicket in that game but was very economical, with figures of 5-2-8-0.

“The U-19 World Cup is definitely a great exposure. Not everyone gets an opportunity to play in the World Cup, even the likes of VVS Laxman did not get a chance. But the journey begins now. You have to keep working hard,” Das said.

“He can consistently bowl at 135kph. He has shown that in the Ranji Trophy. His forte has been speed and bounce… He’s not a swing bowler per say, but he has a natural ability to to generate off the seam movement and more bounce,” the coach said.

Das signed off by saying that Porel’s next target should be the senior World Cup in 2019.

“In fact, he’s struggling with his height, finding it difficult to cope up the sudden growth in a few years. When I first saw him seven-eight years back he was 5 feet 10 inches, now he has a lanky frame of six feet three inches,” he said.

“The biggest challenge for him, and me, is to keep him physically fit so that he could bowl with full strength. We will do our best. Porel should target the 2019 World Cup now.”

Meanwhile, Porel’s father, Chandranath, said it’s a “fairy-tale comeback” for the 19-year old after the foot injury. “It’s been a fairy-tale comeback for Ishan from his (foot) injury. He won the match for us against Pakistan,” he said.

On the celebrations at home, Chandranath said: “Thousands from our ‘para’ (neighbourhood) have gathered here and are celebrating the win with drum beats. We have sweets for all.” 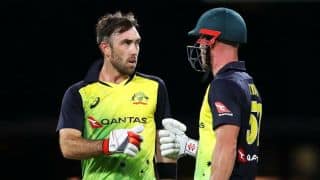