Ishant Sharma has picked up his fifth five-wicket haul in Test cricket.

New Zealand are at 111 for six after 39 overs in the afternoon session on Day One of the second Test against India at the Basin Reserve. Ishant had already got the wickets of Hamish Rutherford (12), Peter Fulton (13) and Tom Latham (0) before lunch.

After the break, Ishant dismissed Corey Anderson for 24. He bowled a length delivery and Anderson inside-edged it onto his pads. The ball then bounced and looped up in the air as Virat Kohli at third slip took the catch.

Ishant then dismissed BJ Watling with another good length delivery that took the outside edge and flew to Rohit Sharma at second slip, who took a sharp catch. Ishant had the chance to get a sixth as Kane Williamson inside-edged a length delivery onto his pads and Cheteshwar Pujara took a diving left-handed catch at forward short-leg.

But umpire Steve Davis referred it to the third umpire for doubt of over-stepping. Ishant landed his foot on the crease line and no part of his foot was behind it. The delivery was called a no-ball and Williamson survived. He was on 23 at the time.

After 39 overs, Williamson is batting on 34 and James Neesham is on 12. 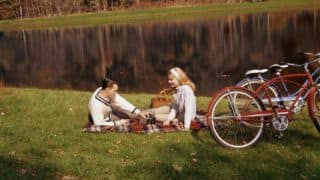 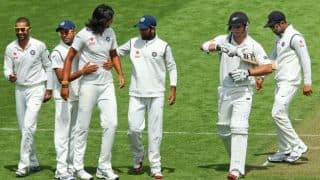