Ishant Sharma’s career is at the crossroads. From being "the best thing that’s happened to Indian cricket" in 2007 to Saturday’s massacre in Mohali, this Delhi speedster has failed even the best of his admirers. Ishant Sharma’s career is at the crossroads. From being “the best thing that’s happened to Indian cricket” in 2007 to Saturday’s massacre in Mohali, this Delhi speedster has failed even the best of his admirers.

For a bowler who has everything from height to physique it’s incredibly worrying that he has failed to live up to expectations in Zaheer Khan’s absence. In the third ODI, where Australia needed 44 off the last 18 deliveries, India seemed to have the match in the bag. But lower-order batsman James Faulkner slammed India’s most experienced seamer for 30 runs in the 48th over. The game turned on its head.

Whatever Mahendra Singh Dhoni may say to defend his bowler, one thing is for sure: India have to look beyond Ishant. For a bowler who has already played 51 Test matches and 68 ODIs, an average of over 30 clearly indicates Ishant has already been given a long rope. And it’s time for him to get back to the basics before attempting another comeback.

Former India all-rounder Manoj Prabhakar, who also coached Ishant during his stint with the Delhi Ranji Trophy team a few years back, is completely disillusioned with Ishant’s bowling. “What can I say? It’s time for Ishant to go back to his coach and try and work on his problems,” Prabhakar said.

Prod him a little and he says, “Ishant lacks in line, length and imagination. There are so many technical issues with his bowling. But he can only improve if he goes to someone who knows him. Where is his coach? Why can’t he go to him?” Prabhakar added.

It’s no secret in Delhi circles that Ishant’s coach is Shrawan Kumar. And the Rohtak Road Gymkhana Club is only stone’s throw from his residence. And when dna tried to find out when Ishant last met his coach or practised with his old club mates, no one could recollect. “He doesn’t go to his coach anymore,” is what an Under-19 Delhi cricketer said. A phone call to his coach failed to yield a satisfactory answer. “He is mostly busy with the Indian team so he has not come here for a long time,” was all Shrawan had to say.

This newspaper has reliably learnt that Ishant hasn’t visited his coach in ages. In fact, he has opened his own cricket academy in partnership with an old Delhi Ranji teammate in upscale Delhi. “Now, Ishant only practises at his academy. Apparently, Ishant’s coach ‘failed’ to help one of his cousins get into a Delhi age-group side,” a veteran Delhi and District Cricket Association (DDCA) administrator said.

So who can help Ishant? If he is struggling against a weak Australian team, then how can the selectors pick him for the tour of South Africa? So far in this series, Ishant has conceded 56 runs off seven overs in Pune, 70 in Jaipur and 63 at Mohali, off which 30 came in one over.

“It will be unfair that all of a sudden when you lose one or two matches and you want a playing XI bowler to be removed and thrown out of the team by saying he is not good,” Dhoni had said.

But even he knows that Ishant is running out of time. “It’s very important to persist with them, to give them experience because they are the part of the side. They are the most talented people and let’s back them,” Dhoni went on to add after the Mohali debacle.

Hailing from a humble background, Ishant’s rise was phenomenal. But it may be just too hard for him to regain his form now, especially because no one’s guiding him. Wonder what Team India bowling coach Joe Dawes is doing! 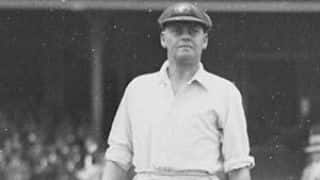 Ashes 1934: Bill Woodfull regains Ashes for the second time on his birthday