Indian fast bowler Ishant Sharma caught attention of many cricket experts in the recently-concluded first Test against Australia at Melbourne Cricket Ground (MCG) when he clocked speed close to 152 kmph. 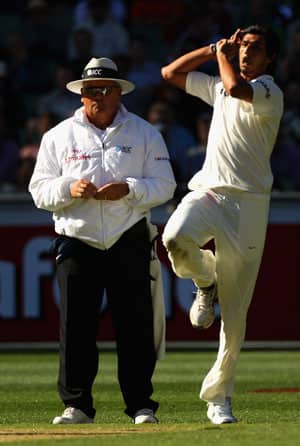 India’s fast bowler Ishant Sharma though managed to take only two wickets, he was successful in keeping Australian batsmen under pressure with his economic bowling Getty Images

Indian fast bowler Ishant Sharma caught attention of many cricket experts in the recently-concluded first Test against Australia at Melbourne Cricket Ground (MCG) when he clocked speed close to 152 kmph.

According to a report in Times of India, one of the deliveries bowled by the lanky bowler touched 152.2 kmph, one of the fastest ever by an Indian.

Ishant along with Zaheer Khan and Umesh Yadav was a heartwarming site for Indian cricket lovers, and many experts like Geoff Lawson believe the trio could go on to become India s best bowling attack ever.

Ishant s mentor Sharwan Kumar was pleased by the Indian pacer s performance in the Boxing Day Test. He said, “Ishant bowled absolutely brilliantly at the MCG. He was unlucky not to claim more wickets but the pressure he built up created opportunities at the other end. It was great to see the Indian pace attack work so well in tandem.”

Kumar said he had earlier advised Ishant to work on few technical aspects of his bowling which worked well for the bowler. He said, “Ishant came to me with some concerns earlier this year before the West Indies tour about the lack of wickets. I just told him to look at old videos and figure things out for himself.

“We then felt that Ishant had started to bowl more chest-on and his wrist was falling away in an effort to bring the ball back in. He spent two-hours a day, four days a week for a month in front of me before the West Indies tour. “

Kumar felt the ankle injury did provide few problems for Ishant but it has been taken care by an ankle brace as suggested by a personal physician.

He said, “He went to doctor Jatin Chaudhary here in Delhi to seek opinion on his ankle. They felt that surgery was not required at the moment and Ishant has been bowling with an ankle brace since then. Sometimes if the strap of the brace comes off then he faces some discomfort, otherwise he has no problem. “

Delhi Daredevils coach TA Sekar felt Ishant would be naturally assisted by the pacer-friendly pitches in Australia and that the fast bowler need not put in extra effort.

He said, “The Australian pitches always have something extra for the pace bowlers and Ishant likes bending his back on pitches down under. In 2007, on his first tour of Australia, Ishant had clocked 147 kmph and this time raised it to 152.”