Even though he is happy for his teammates, speedster Ishant Sharma still feels the pain of not being a part of the Indian squad that made history after winning the World Cup last month. 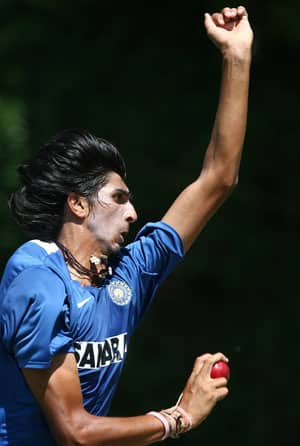 Even though he is happy for his teammates, speedster Ishant Sharma still feels the pain of not being a part of the Indian squad that made history after winning the World Cup last month.

“As a cricketer, it hurts when you see your teammates create history and find yourself not there in the mix. But as an Indian, I am proud of what they achieved,” the 22-year-old told PTI in an interview on Monday.

“It was emotional for me as well. After 28 years, India won the World Cup. I think that was huge. It was the biggest moment in a life of a cricketer. I can feel what it means even though I wasn’t present there.”

Ishant, selected in the national squad for the upcoming tour of West Indies after being overlooked for the World Cup, expressed happiness at his return and said he would take the opportunity to cement his place in the side.

“It is nice to be back in the one-day side. The West Indies tour will be a good platform for me to do well and cement my place in the team,” said the lanky pacer who has taken 90 Test and 63 ODI wickets in 31 and 45 matches, respectively.

Asked whether there will be additional responsibility on him during the tour in the absence of the experienced duo of Zaheer Khan, who has been rested, and Ashish Nehra, who is out with an injury, Ishant said it was not the case.

“I don’t think so. Munaf Patel did well in the World Cup. Even Vinay Kumar has played some games and did well for us. You can’t say that if somebody has played 50-60 games for the country he is irresponsible. Obviously, there is pressure irrespective of whether Zak or Ashish Nehra are playing or not. You are playing for your country which is a matter of pride and great responsibility,” the fast bowler said.

Ishant maintained that being World Champions would not bring additional pressure on the team to perform and the West Indies tour would be a new opportunity to rewrite history.

“I don’t think it adds pressure. When I was playing in South Africa, the focus was on winning the World Cup. We won that. I think it is a pretty good thing. For a cricketer, its just about going there and having fun and enjoying the game. That’s the most important thing for a player. We always want to do something special on the field. It’s a good chance for us to create some new history there (in the Caribbean),” he added.

On the appointment of Gautam Gambhir as skipper of Team India for the lone T20 and ODIs during the tour, he said, “I don’t think I need to say anything about his captaincy because he led us to 5-0 win over New Zealand. Kolkata Knight Riders (under Gambhir) is now in the top 4 (in IPL 4). So I don’t think I need to comment on Gautam’s leadership qualities.”

Ishant, who has been in good rhythm in the ongoing IPL while representing the Deccan Chargers, said he was enjoying opening the bowling with Dale Steyn.

“It is a great experience to be with fast bowlers like Wasim Sir (Wasim Akram under whom he trained during his stint with KKR) and Dale Steyn. It’s a good feeling to share the new ball with Steyn. I’m enjoying bowling with Dale actually. He is a nice human being and a positive guy. He shares things (talks) with you. Whenever I get confused about bowling fast, I go to him,” the Delhi cricketer said.

Ishant said the South African paceman had advised him to concentrate on his strengths and not think about swinging the ball, as it was not his forte.

“He (Steyn) just says that I’m not the kind of a bowler who will swing the ball. I’m more of a bounce and hitting the deck kind of a bowler. So he tells me to hit the right areas and bowl as fast as I can and do the things I can instead of looking for swing.”

Ishant stated that he had used the time, when he was out of the team, to work on his fitness.

He rejected reports that he had changed his action.

“Not really. If you think more about technical aspects you get confused. For me, it is more of practical (aspects) than technical. How you think about your game, how you go there and play, I think that’s what matters.”