Australia coach Justin Langer said he hoped his side would return a better team come next year’s World Cup after going through the “jungle” in their tour of England. Having been whitewashed 5-0 by England in a preceding ODI series, Australia’s limited overs tour ended with a 28-run defeat by Eoin Morgan’s men in a T20 International at Edgbaston on Wednesday.

Once again Jos Buttler put Australia’s bowlers to the sword, a 22-ball fifty following his match-winning century in a dramatic 1-wicket win in the fifth ODI at Old Trafford.

And, not for the first time this trip, spin proved Australia’s Achilles heel with England leg-break bowler Adil Rashid taking 3 for 27 as the tourists, chasing 222 to win, were dismissed for 193.

Australia, the reigning 50-over World Cup champions, arrived in England — the 2019 tournament hosts — without a raft of first-choice players. Former captain Steve Smith and his deputy David Warner were both missing after being handed one-year bans for their roles in March’s ball-tampering scandal in Cape Town, an incident that prompted Darren Lehmann’s resignation as coach and his replacement by Langer. Australia were also without injured Ashes-winning fast bowlers Mitchell Starc, Pat Cummmins and Josh Hazlewood as well as the sidelined Mitchell Marsh.

“There’s light at the end of the tunnel, there’s no doubt about that,” Langer told reporters. “We knew it was going to be a big job knowing where we came from in South Africa. “On the surface it looks like a complete disaster but we have talked about a team for the World Cup and the Ashes and I think we have unlocked a few answers, but it hurts when you get beaten, particularly in England.”

During the ODIs, Australia’s bowlers were flayed by England for an all-time men’s ODI record total of 481 for 6 at Trent Bridge.

Langer likened that experienced to his own Test debut: “My first Test match was against the West Indies and it was pretty scary. I remember David Boon saying ‘Test cricket will never get tougher than this’. I thought he was just being nice to me but it was so true. I learnt something from it and I was tougher from it.”

His first ball saw Langer hit on the helmet by Ian Bishop, but he went onto enjoy a distinguished 105-Test career that featured 23 hundreds

“When you look at Trent Bridge for our young blokes to get hit for 480-something, it doesn’t get tougher,” Langer added. “Hopefully it will add some layers to their character and not scars. A few of the boys have walked into the jungle and we’ll see how they go, not only over the next six months, but over the next two or three or 10 years.”

And with the likes of fast bowler Billy Stanlake and left-arm spinner Ashton Agar shining amid the gloom of repeated defeats in England, Langer insisted: “If we can get some of those guys learning and growing and if some of the other guys are available, who knows what could happen in twelve months’ time?”

Meanwhile an admiring Langer said England fully deserved their position atop the ODI rankings: “We’ve got young guys coming in against the best one day team in the world. I’ve been absolutely blown away by how well England are playing. They’re at the peak of their powers right now.” 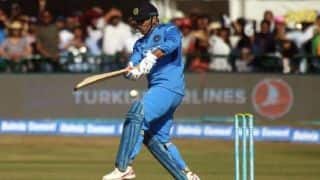 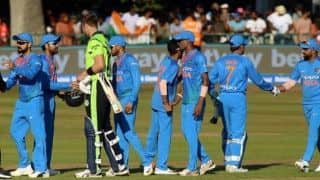