It is frustrating when you're not being picked: Doug Bracewell

It is frustrating when you're not being picked: Doug Bracewell
By CricketCountry Staff

Doug Bracewell waited for his chance patiently watching his teammates complete an ODI series clean-sweep over Sri Lanka. An injury to Jimmy Neesham opened up a slot in the playing XI for a one-off T20I on Friday and Bracewell grabbed the opportunity with both hands to leave quite an impression.

After New Zealand were reduced to 55/5 at Eden Park, Bracewell forged two important partnerships with Ross Taylor and debutant Scott Kuggeleijn to bail them out. He struck 44 off 26 in an innings that featured five sixes that lifted Black Caps to 179/7.

Bracewell was part of New Zealand ODI squad but had to watch from the sidelines as his teammates completed a 3-0 clean sweep of Sri Lanka. “Obviously I didn’t get a chance in the one-dayers, but that’s international cricket, and I was ready to go tonight,” Bracewell said after the match.

After pushing the final tally to a competitive level, Bracewell picked up a wicket for 19 runs in his two overs apart from claiming two catches. For his all-round show, he was chosen as the player of the match.

His 44 turned out to be the top score from either side as Sri Lanka folded for 144 inside 17 overs with the hosts claiming a 35-run win. “I was just looking forward to getting a game and trying not to put myself under too much pressure, trying to go out and enjoy it, and I was pretty stoked to contribute with the bat and with the ball. It is frustrating when you’re not being picked. But you’re there to do a job when needed,” the 28-year-old allrounder said of his performance.

He continued, “It was really good for the confidence, to be honest. I haven’t really shown that ability at international level, which has been frustrating. I think at times, I’ve put myself under pressure and tried a little bit too hard and it hasn’t worked out.

“I just went back to the basics and got an opportunity to bat a bit of time today. Batting with Ross who’s an experienced player helped as well and it was nice to get a few away.” 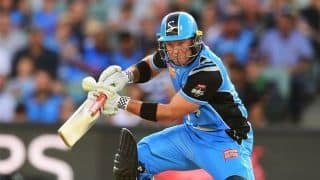