It will be thrilling to bowl at Sachin Tendulkar: Pat Cummins

It will be thrilling to bowl at Sachin Tendulkar: Pat Cummins

He considers Sachin Tendulkar the "Rockstar" of Indian cricket and Australia's new-found pace sensation Pat Cummins says he can't wait for a possible duel with the batting icon in the Test series next month. 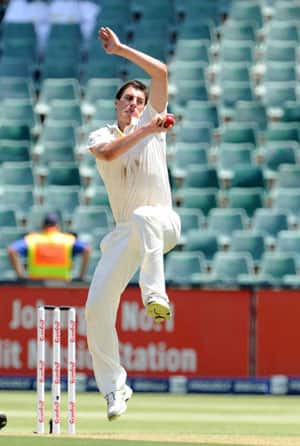 He considers Sachin Tendulkar the “Rockstar” of Indian cricket and Australia’s new-found pace sensation Pat Cummins says he can’t wait for a possible duel with the batting icon in the Test series next month.

The 18-year-old, who made a sensational Test debut by taking seven wickets to set up a thrilling series-levelling win for Australia against South Africa earlier this month, is now looking forward to bowl against Tendulkar.

The 38-year-old Tendulkar made his Test debut three-and-a-half years before Cummins was even born.

“He’s one of the greats of all time, I’ve grown up watching him,” Cummins told The Sydney Morning Herald.

“For someone who is a bit of a pocket rocket, he’s not too tall, even against the fastest bowlers he seems to stand up and lift another gear.

“To get a game, even here in Australia, would be unbelievable. To be versing the likes of Sachin Tendulkar, Rahul Dravid – it’s going to be a massive challenge. He’s someone hopefully all the bowlers don’t get too overawed versing him and I guess you’ve got to still imagine him like any other batsmen,” he added.

India and Australia will square off in a much-anticipated Test series starting December 26. Cummins said he would not “waste time” chalking out a bowling strategy for Tendulkar as the Indian is “too good everywhere”.

“It’s more imagining the moment of playing people like him, it’d be a massive thrill,” Cummins said.

“Sachin Tendulkar has got a massive following in India and is a rockstar over there. Someone like him, all the fame, it’d be on a whole new different level versing him,” he added.

Cummins might be hot property at the next players’ auction for the cash-rich Indian Premier League but the youngster does not want to think too far ahead.

“I haven’t really thought about it at the moment, it’s still a fair while away,” Cummins said.

“You definitely don’t want it to impact on any cricket back here. It will be a big compliment if they did (show interest) but I haven’t heard anything about it yet so we’ll see what happens,” he added. (PTI)