It's time to move on: Abhishek Nayar retires from first-class cricket

It's time to move on: Abhishek Nayar retires from first-class cricket

India domestic veteran Abhishek Nayar has called time on his first-class career. Nayar played 99 first-class matches for domestic giant Mumbai before shifting to Puducherry after not being picked for the 2017-18 Ranji Trophy season.

“It’s been an absolute honour and I’m grateful for all the support I’ve received through my playing career,” he posted on Instagram.

“Gave it my everything and like they say ‘no regrets no comebacks’.its time to move on…thank you everyone for the love and support.”

It’s been an absolute honour and I’m grateful for all the support I’ve received through my playing career.Gave it my everything and like they say ‘no regrets no comebacks’.its time to move on…thank you everyone for the love and support??. #cricket #life #cricket #grateful #memories

Nayar informed BCCI and Mumbai Cricket Association of his decision while he was with Trinbago Knight Riders during the Caribbean Premier League season.

“Yes, I gave a letter to the BCCI and the Mumbai Cricket Association (MCA) when I was in the West Indies (to help the Trinbago Knight Riders in the Caribbean Premier League) last month, informing them of my decision to quit the game. I thanked both of them, all my coaches, my teammates, family and friends for all the support they gave me through my thick and thin,” Nayar told The Times of India.

Nayar also played four ODIs under MS Dhoni for India but didn’t score a run or take a wicket. The 36-year-old allrounder said he has no regret and his content with the career he has had.

“At the end of the day, I’ve no regrets in my career, not even the fact that I couldn’t play my 100th FC game for Mumbai. After all, how many players get to play 99 games for Mumbai? I’m lucky that I played 99. Not playing that one game doesn’t change the way I look at the 99 games I played for Mumbai. I’m extremely happy and content with my career, and Mumbai cricket will always have a special place close to my heart. I know what it takes to be a part of that dressing room.” 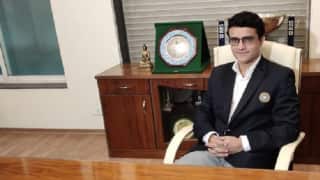 From Grant Govan to Sourav Ganguly: List of all the 39 BCCI Presidents