Eight years after last turning out in England colours, Joe Denly made a remarkable return to international cricket with a match-winning performance.

Eight years after last turning out in England colours, Joe Denly made a remarkable return to international cricket with a match-winning performance in a one-off T20I against Sri Lanka on Saturday.

It was in February 2010, against Pakistan in Dubai, that Denly last played an international match. He was 23 and an opening batsman then. On Saturday, he marked his return in a different role a frontline spinner and a lower-order batsman. He returned brilliant figures (4/19) with the ball and made a handy contribution when he came out to bat at No. 7 at the Premadasa Stadium.

Talking about the intervening period between he spent on the sidelines, Denly said, “What’s the lesson? To never to give up on that dream, I suppose. I’ve had some ups and downs in the last eight years. But, over the last two or three years, I’ve enjoyed my cricket a lot more. I’ve played with a bit more freedom and I’ve learned to deal with failure a lot better. I feel a different player to the one I was in 2010. This time I’ve come in with the attitude of embracing it and enjoying every moment of it.”

2018 will remain etched in Denly’s memory. Not only did he earn a second chance for England, his stupendous show in domestic cricket saw him being named Professional Cricketers’ Association (PCA) Players’ Player of the Year. This was apart from scooping the awards for Vitality Blast Player of the Year (T20) and Royal London One-Day Cup Player of the Year (One-day).

“I didn’t know what to make of it all back then. But being more experienced and playing in various competitions around the world has put me in a good position to step into international cricket and perform. I’m enjoying my cricket at the minute and hopefully that’s showing on the field,” he was quoted as saying by ESPNcricinfo.

After England posted 187/8, legspinner Denly opened the bowling and he picked up wickets in his first two overs. Then, with the visitors firmly in sight of a comprehensive win, he picked up two more wickets in the night’s final over to claim career-best figures.

“Being, primarily, a batsman, I feel I have a pretty good sense of what batsmen are trying to do. I back myself to land my leg-spinner reasonably well and I enjoy opening the bowling. I did it for Kent in T20 last summer,” he said. 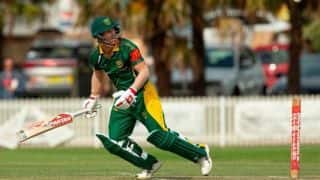