Leach picked up 5 for 83 as England beat Sri Lanka by 57 in the second Test in Pallekele to register their first series win in Sri Lanka in 18 years.

Jack Leach picked up his maiden five-wicket haul as England beat Sri Lanka by 57 in the second Test in Pallekele to seal the series. England now lead the three-Test series 2-0 with the final match to be played in Colombo from Friday. Chasing 301 to win, Sri Lanka were bowled out for 243 with Leach and Moeen Ali sharing nine wickets.

It took roughly half an hour of play on the final day to give England their first Test series win in Sri Lanka in 17 years. With rain washing out almost 40 minutes of play last evening, play once again began before scheduled start of play with Leach beginning the proceedings. The left-arm spinner, whose overnight figures read 4 for 73, picked up the final wicket to give England the series and take his match tally to eight scalps.

Moeen struck in the sixth over of the day to remove Sri Lanka’s eighth wicket. Niroshan Dickwella, Sri Lanka’s only hope, edged to Ben Stokes at slips to give him his second wicket. Stand-in captain Suranga Lakmal lasted just two deliveries before he became the allrounder’s fourth wicket of the innings, getting out LBW.

For three overs, Sri Lanka defended, before Malinda Pushpakumara offered Leach a caught and bowled. Even as he went upstairs to review, England looked confident, and victory was theirs.

To summarize, England won the toss and opted to bat first. Half-centuries from Jos Buttler and allrounder Sam Curran gave them a 290 as Sri Lanka’s spinners Dilruwan Perera and Pushpakumara combined to take out seven wickets. In reply, Sri Lanka responded strongly with the bat, with Dimuth Karunaratne, Angelo Mathews and Roshen Silva scoring fifties.

England in their second innings were buoyed by a wonderful 15th Test century from their captain Joe Root, and even as Akila Dananjaya took 6 for 115, Ben Foakes’ half-century while batting with the tailenders set Sri Lanka a target of 301 to win. Karunaratne and Mathews continued from where they’d left off in the first innings but barring them, no batsman could quite step up and Sri Lanka were eventually bowled out for 243. 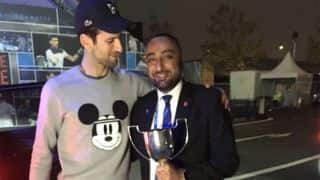 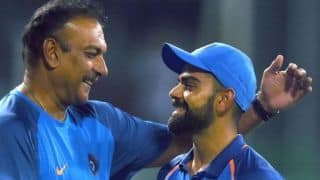