South Africa’s Jacques Kallis, one of the greatest all-rounders that the game has seen, announced his retirement from all forms of international cricket, bringing the curtains down on an illustrious career spanning nearly two decades.  The 38-year-old Kallis said his poor performance in Sri Lanka prompted him to take the decision to retire though he will continue playing in the Indian Premier League and other T20 leagues.

Kallis scored 13,289 runs in 166 Tests with 45 Test centuries and 58 half-centuries at an average of 55.37 — second only to the iconic Sachin Tendulkar.  He also had 292 wickets with five five-wicket hauls and took 200 catches in the longer format.

He was also an integral part of the ODI set up scoring 11,579 runs and taking 273 wickets from 328 ODIs with 17 centuries and 86 half centuries. He has represented South Africa in five ICC World Cups since 1996.

Often compared with the legendary Gary Sobers for his all-round exploits, former India captain Rahul Dravid had recently said that Kallis’s achievements are “only second to Tendulkar”.

The Proteas legend wanted to play the 2015 World Cup in South Africa but after the series against Sri Lanka where he totalled five runs from three innings, he decided to call time on his decorated career.

“I realized in Sri Lanka that my dream of playing in a World Cup was a bridge too far. I just knew on that tour that I was done. The squad that was in Sri Lanka is an amazing one and I believe they have a good chance of bringing the trophy home in March,” Kallis said in a statement released by Cricket South Africa (CSA).

“I would like to thank Cricket South Africa, the team, the team sponsors, my sponsors, the fans and all the people who have been involved in my career. It has been an amazing journey. I am not retiring from all cricket as I have a two-year contract with the Sydney Thunder.” 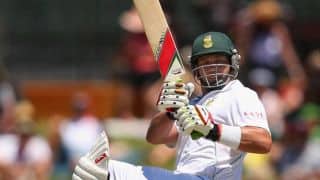 Jacques Kallis retires from international cricket: How the legend began