Jakati's catch proved to be a turning point: Warne

Jakati's catch proved to be a turning point: Warne 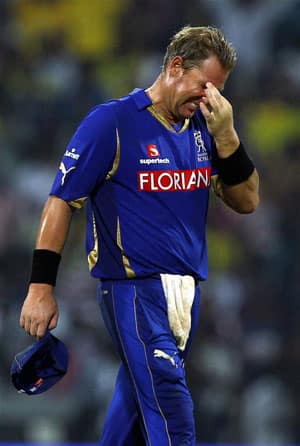 Jakati produced a brilliant effort to put the breaks on Royal’s scoring rate, which saw them score 81 runs for the opening wicket in just 10 overs.

“We actually bowled pretty well. It was a good wicket, it was a 160-175 wicket. I thought we could’ve got more, if Watson had stayed in there a couple of overs. Jakati’s caught and bowled was probably the turning point of the game. It was a very good catch. He absolutely creamed it,” Warne said after his team’s eight-wicket defeat at the MA Chidambaram stadium.

“We know what Watson can do, and it was probably the game changer, but we still should’ve been good enough to have got 160-170,” he added.

Warne expressed disappointed with what the team achieved despite getting a flying start.”I thought we were 15 or 20 short, I said it at the toss. I said it was a 160-170 wicket. I thought we could make it up in the field but a couple of errors in the field, a couple of silly things. We gave away nine or ten runs in a couple of overs. 86-1 off 10 overs… we’ve got to make 160 for me. And that’s run a ball. Run a ball is 150. I was disappointed.”

The Royals captain, however, was all praise for Rahul Dravid, who played a fluent knock of 66.”I think Rahul Dravid played beautifully. He’s such a class player. I love playing with him. It’s great to have him in the team, but fair play to Raina and Hussey.”

“(We had) too many dot balls, the batsmen that came in, took too long to get in. I thought we let ourselves down (in the field). Fielding has always been one of our hallmarks.”

Asked if he thought matches in Chennai should be played at night due to the extreme heat, Warne said “I would’ve thought you play the day games you can play in April here in Chennai and in May, maybe at night, wouldn’t you? But we knew that before the tournament. The heat was the same for both teams and it didn’t really play a part for any of the teams.No issue there whatsoever.”

We aim to play our best cricket against Deccan: Shipperd