Anderson said Robinson's apology has been accepted and said the 27-year-old has grown and matured from his teenage days.

England legendary pacer James Anderson says the team has unanimously accepted Ollie Robinson’s apology for posting racist and sexist tweets as a teenager nine years ago and the suspended pacer has the full support of the side. Robinson, who made an impressive Test debut with a match haul of 7 wickets against New Zealand at Lord’s, has been suspended by the country’s apex cricket body for some of his offensive tweets dating back to 2012-13, for which he has already tendered an unconditional public apology.

Anderson threw his weight behind Robinson during an interaction with the British media. Asked whether Robinson’s apology has been accepted by the team or are some players still uneasy about it, he said, “No, I think it’s been accepted.”

“He stood up in front of the group and apologised and you could see how sincere he was and upset he was, and I think as a group we appreciate that he is a different person now. He’s done a lot of maturing and growing since then, and he’s got the full support of the team.”

The UK’s political class also weighed in on the issue urging the England & Wales Cricket Board (ECB) to reconsider its decision of suspending the fast bowler for something he has done years ago as a teenager.

Anderson was also asked about the impact of the player’s suspension on the team. “Well yeah, I think it’s a… you know it is a difficult time. I think as players we’re trying to learn from this really.

“We realise that it’s important to try and get educated around these issues, which we’re continuing to do with the ECB and the PCA (Professional Cricketers’ Association) we’ve already been doing workshops before this series to try and help improve ourselves as people basically, to try and make sure that this sort of thing doesn’t happen.”

Anderson will become England’s most capped Test player, surpassing former run-machine Alastair Cook, if he plays in the second Test against New Zealand.

At the close of first day’s play at Lord’s, the 27-year-old Robinson apologised and said he was going through a difficult period in his life when he posted the tweets as an 18-year-old. “I want to make it clear that I’m not racist and I’m not sexist,” Robinson had said.

“I deeply regret my actions, and I am ashamed of making such remarks. I was thoughtless and irresponsible, and regardless of my state of mind at the time, my actions were inexcusable.

“Since that period, I have matured as a person and fully regret the tweets.”

However, his apology was not enough as the ECB suspended him after the end of the first Test while initiating a disciplinary investigation.

As a result, Robinson will not be available for the second Test that which begins at Edgbaston on Thursday. 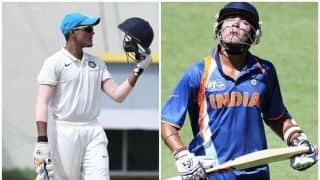