James Anderson said it felt "strange" to have received congratulations from the only other two living England bowlers to have taken 300 Test wickets after reaching the landmark at Lord's on Friday. 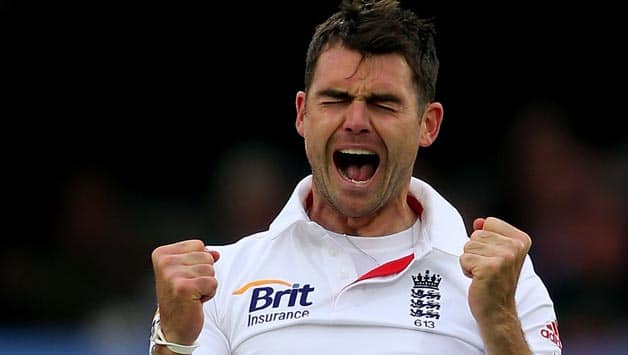 James Anderson said it felt “strange” to have received congratulations from the only other two living England bowlers to have taken 300 Test wickets after reaching the landmark at Lord’s on Friday.

On the ground where his Test career began a decade ago, against Zimbabwe, Anderson took the two wickets he needed to reach the milestone and so join the late Fred Trueman, Bob Willis and Ian Botham as the fourth member of England’s ‘300 club’.

After England had been dismissed for 232 in their first innings on Friday, Anderson got himself into the record books by removing both New Zealand openers before tea as the tourists slumped to seven for two.

Anderson in fact finished Friday with 301 Test wickets, having taken an impressive three for 32 in 15 overs as New Zealand closed on 153 for four — 79 behind England’s first innings 232.

Hamish Rutherford became his 299th Test wicket, with the aid of a fine first slip catch by England captain Alastair Cook, before another full-length ball took Peter Fulton’s outside edge and was held by second slip Graeme Swann.

As he walked off at tea, the 30-year-old Lancashire seamer was congratulated by Botham, England’s most successful Test bowler with 383 wickets, and Willis, who like Anderson was once the spearhead of the attack.

“I don’t really know how I feel about that, it’s quite strange,” Anderson told reporters.

“Guys that have done so much in the game, achieved so much and who I watched as a kid — it’s quite strange when they come up and congratulate you on that sort of thing. I’m just delighted I’ve got there and hopefully there’s plenty more (wickets) left.”

Botham has long forecast that Anderson will beat his England record and the bowler himself added: “I don’t see why not, but there’s still a long way to go and I have to play a lot of cricket to get there.”

From seven for two New Zealand rallied thanks to a sparkling 66, including 13 boundaries, by former captain Ross Taylor.

“I don’t think we bowled very well at him to be honest,” said Anderson. “But he played well, counter-attacked well after a dodgy start for them.”

Taylor later compared Anderson to a mixture of South Africa’s Dale Steyn and Vernon Philander, two key members of an attack that have taken the Proteas to the top of the world Test rankings.

The overcast conditions at Lord’s on Friday were just about ideal for Anderson, a renowned swing bowler.
And the way in which he took his 300th wicket in 81 Tests was typical of so many of his dismissals with Fulton being drawn into an outside edge well held by Anderson’s close friend Swann in the slips.

“It’s nice to see him (Swann) hold on to one!,” joked Anderson. “It was a really nice moment. It meant a lot to me and I could see how much it meant to him, how pleased he was for me.”

And the moment was made even more special for Anderson by the fact his parents were in the crowd — not that they were taking any chances.

“My mum and dad were here today (Friday). They booked in until Monday (the final day of the Test) just in case,” Anderson said.

Note: Anderson’s figures as at stumps on Friday.