James Anderson was out of the first Test following a calf injury.

James Anderson is all set to return to the England team for their second Test against hosts South Africa according to Trevor Bayliss. Anderson was out of the first Test following a calf injury, which was not at all good news for his side. Despite the fact, England defeated the home team by a massive 241 runs in Durban to take a lead by 1-0 in the four Test match series between the two nations. England skipper Alastair Cook was quoted saying that he was hopeful of Anderson returning to the side prior to the Cape Town Test and Bayliss confirmed that. Scorecard: South Africa vs England 2015-16, 2nd Test at Cape Town

According to a report on skysports.com, the England cricket team coach stated, We’ll make the decision when we get to Cape Town. The signs look good and he’s been working hard but we’ll have to wait and see how he pulls up.” READ: Quinton de Kock, Chris Morris return for 2nd Test against England at Cape Town

James Anderson is the most successful Test bowler for England so far, having bagged 426 Test wickets with an economy of 3.02 and it could be easily anticipated that the team s bowling attack would definitely miss their most experienced and dependable bowler. But Stuart Broad and Steven Finn compensated with their brilliant spells as they helped their side register a 241-run win over the hosts. Broad took 5 wickets in the match while Finn got a total of 6 wickets. Another successful bowler for the tourists has been Moeen Ali who peered through the South Africa batting and got 7 wickets in the match, including those of AB de Villiers, JP Duminy and Francois du Plesis. READ MORE: Alastair Cook: England a good side to lead

England will play South Africa in the second Test of the series on January 2 at Cape Town. 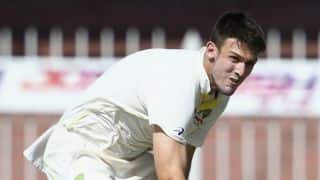