England fast bowler James Anderson has went past former Indian captain Kapil Dev‘s record of 434 Test wickets in the first Test match against Sri Lanka which is being played at Headingley. He took the wicket of Kaushal Silva, his 434th scalp and Angelo Mathews his 435th. Anderson had 433 wickets from 113 Test matches before this game. Kapil, on the other hand took those many wickets in 434 Test matches. Both the players have more or less similar average. Kapil’s bowling average is 29.14 while Anderson averages 29.18. Kapil’s strike rate is 63.9 while Anderson’s was 58.1. LIVE CRICKET SCORECARD: England  vs  Sri Lanka First Test at Headingley, Leeds: Live Cricket Score

Talking of the current match, Sri Lanka won the toss and elected to bowl first. Riding on Alex Hales’ 86-run knock and a good contribution of 140 runs by Jonny Bairstow lower down the order, England posted 298 in their first innings. For Sri Lanka, Dushmantha Chameera and Dasun Shanaka took three wickets each. Sri Lanka lost all their three top-order batsmen within the first six overs itself. First to go was Dimuth Karunaratne. Anderson picked up the wicket of Silva off the fourth ball of the fifth over of the innings. Kusal Mendis was the next to follow. Mendis and Karunaratne went for duck off the bowling of Stuart Broad. Silva scored only 11 runs having faced 17 balls. LIVE BLOG: England (ENG) vs Sri Lanka (SL) 2016 Live Cricket Score, Day 2

When this report was published, Lahiru Thirimanne and Dasun Sanaka were at the crease, and Sri Lanka were still trailing by 221 runs. They now need a partnership from Chandimal and Mathews so that they can get closer to England’s first innings total. 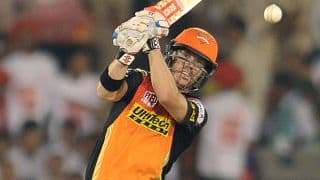