Anderson threw the ball into the ground after he was warned for running onto the pitch.

James Anderson has been handed another demerit point, his second in as many matches, after expressing dissent during the first Test against Sri Lanka in Galle. The England fast bowler threw the ball into the ground after he was warned for running onto the pitch by umpire Chris Gaffney.

The incident took place in the 39th over of Sri Lanka’s innings, following which Anderson was found to have violated the Article 2.8 of the ICC Code of Conduct for Players and Player Support Personnel related to “showing dissent at an umpire’s decision during an international match.”

After the day’s play, Anderson admitted to the offence and accepted the sanction handed out by match referee Andy Pycroft. This was Anderson’s second offence since September. During England’s fourth Test against India at the Oval, Anderson apparently involved in an aggressive discussion with umpire Kumar Dharmasena and along with being handed a demerit point, he was also fined 15 percent of his match fee. He had snatched his cap from Dharmasena after the umpire had turned down an appeal for a LWB shout against Virat Kohli. Pycroft was the referee then as well.

Anderson is now four more demerits point away from picking up a suspension point which would mean that he would be barred from playing a Test for England. Each demerit point is valid for a period of two years from the time of being handed out. 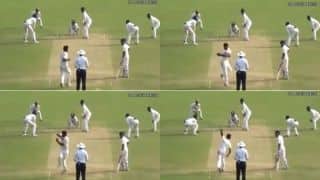