England new skipper Eoin Morgan has revealed that pace spearhead James Anderson is likely to be fit for the clash against India at Brisbane on Tuesday. Anderson missed the first match of the triangular series in Sydney, where the hosts registered a three-wicket win over England.

Morgan said that Anderson was very likely to be fit for the next game, adding that if he had played against Australia, it would have been a bit risky as he had got a stiff groin, the Manchester Evening News reported.

Though Morgan tried to steady the ship to guide his team to reach 234 with his resilient knock of 121, David Warner stole the show as he smashed his first ODI century in almost three years to guide the Australians to a three-wicket win with more than 10 overs to spare.

Meanwhile, England pace spearhead James Anderson believes that labeling his team as  underdogs could in fact work in their favour in the upcoming ICC Cricket World Cup 2015, which gets underway from February 14 in Australia and New Zealand.

England are believed to have no chance of winning the pinnacle tournament on account of incurring series defeat against Sri Lanka and subsequently omitting skipper Alastair Cook from the 15-man squad for the World Cup.

Anderson said that people had written them off and they were going there with no expectation from the English public or media, adding that they had a great chance of going a long way in the competition and the fact they had been written off would working their favour, Manchester Evening News reported. 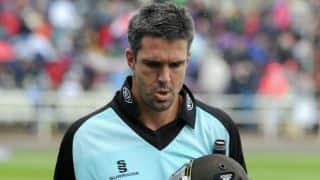 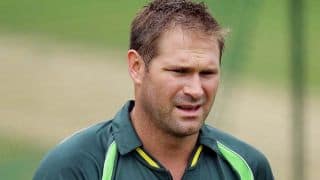