The verdict was made by Judge Godron Lewis after six hours of hearing with both parties in tow.

The verdict of the ’Pushgate’ incident which involved Indian all-rounder Ravindra Jadeja and England pacer James Anderson has finally reached a settlement with neither players found guilty after a six hour long hearing, which was presided over by Judge Gordon Lewis. The hearing took place in Southampton, the venue of the recently concluded third Test, which saw the hosts romp to a 293-run victory.

The Judicial commissioner made his decision via a video conference which also saw the contribution of possible eyewitnesses of the incident. Jadeja was earlier fined 50 percent of his match fee for improper conduct but a plea to remove the penalty from the Indian player was accepted by the International Cricket Council (ICC). Anderson’s teammate and fellow England pacer Stuart Broad was also present at the venue of the hearing.

The ECB and Anderson were represented in the hearings by Nick De Marco while Adam Lewis QC represented Jadeja. The hearings were also attended by the two team managers, the ECB’s Paul Downton, the BCCI’s Sundar Raman and MV Sridhar, the ICC’s General Manager – Cricket, Geoff Allardice, and the ICC’s Ethics and Regulatory lawyer, Sally Clark, read a statement from the ICC. 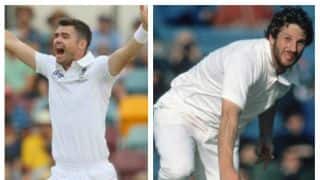