Watling and Neesham have amassed 149 runs for the sixth wicket.

James Neesham and BJ Watling stood firm and posted well made half-centuries to blunt the West Indian bowlers to steady New Zealand after the hosts took three early wickets. After the top order, led by Kane Williamson and 83 from opener Tom Latham put the Kiwis in command at the end of Day one. After Shane Shillingford‘s wild spin on the ball restricted the visitors, Neesham went after the off-spinner and brought up a fine half-century. Neesham and Watling have now piled up 149 for the sixth wicket and plundered 129 in the session.

The line was fuller from the West Indian spinners and the batsmen were restricted to defending and prodding  in the first quarter of the session. The empty stands were filling up quickly with quite a few middle-aged gentlemen — quite summing up the younger generation’s attitude towards Test cricket.

Shane Shilligford in particular was getting the ball to grip and turn sharply into the batsmen and the batsmen were forced to defend most of the deliveries from the wily spinner. During what was a difficult phase for the New Zealand duo of Neesham and Watling, the New Zealand wicket-keeper stood out for his exemplary display against spin.
Watling displayed positive footwork and knew when to come forward or romp back. The most important quality while facing spin — knowing when to punish the bad deliveries holds paramount importance. Watling showed that and held fort while West Indies wrested back the initiative. At one stage, Neesham said enough is enough and stepped down the wicket and smashed two sixes over the sight-screen in the same over. Suliemann Benn, on the other hand continued to be average and turned out to be easy pickings for the batsmen.

After a rather quite beginning, Neesham grew in confidence and displayed more attacking intent at the crease and brought up his half-century. The southpaw used his feet well against the spinners and that yielded more boundaries for the black caps. The batsmen crossed their century partnership and  runs came at very quick time in the session. The run-rate, was the best of game and New Zealand now have the ball in their court. West Indies did get a couple of chances but it were not the easiest chances to latch on to. Neesham had a wild slash but the ball was went over 39-year old Shivnarine Chanderpaul and Chris Gayle’s arm-ball decieved Watling and skipper Denesh Ramdin. The batsmen was on 49 at the time.

If things stay this way, Brendon McCullum should consider a declaration and try to use spinners Mark Craig and Ish Sodhi to extract turn from the slow Jamaica wicket. 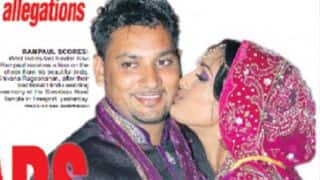 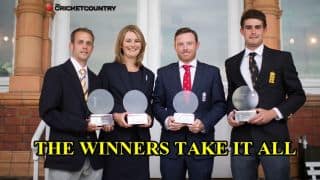