This was Pattinson’s fourth five-wicket haul in the Tests with the last one coming off against India two years back in Chennai.

Hobart: Paceman James Pattinson said Sunday he did away with his remodelled bowling action and returned to his old approach to spearhead Australia to an emphatic innings victory over the West Indies in Hobart.  The recalled fast bowler failed to take a wicket in the West Indies first innings with his new more front-on style but made adjustments and claimed five for 27 in the second innings to trigger a batting collapse. The West Indies were routed for 148 and were crushed by an innings and 212 runs in the first Test, raising fears about their competitiveness in the remaining two Tests against Australia in Melbourne and Sydney.  Pattinson was brought into the Australian side for the sidelined Mitchell Starc and made minimal impact bowling in the first innings with no wicket for 68 off 15 overs.  FULL SOCRECARD: Australia vs West Indies, 1st Test at Hobart

He reviewed video of his bowling and spoke with team bowling coach Craig McDermott and skipper Steve Smith before ripping through the Caribbean tourists in the second innings. “There were a little bit of nerves and I didn’t put it together in the first innings which was disappointing,” Pattinson told reporters.  “But to get another chance and to take that chance was pretty exciting and a relief after being out of the picture for a couple of years. I ran in and wanted to bowl fast like I did when I first came on to the scene,” added Pattinson.

Pattinson, 25, playing in his first Test since March last year after recovering from back and hamstring issues, said he studied what he was doing wrong and came back a changed bowler to skittle the Windies.  “I looked at a bit of vision on the night before and I wasn’t releasing the ball where I wanted to in the right position,” he said. “I thought if I bowled like I did in the first innings then I wouldn’t be getting too many games, so I thought I better change something. So I did a little bit of work on it in the morning to get my wrist behind the ball a bit more and get it good for outswind,”says Pattinson. ALSO READ: James Pattinson’s 5 for 33 against west Indies in 1st Test still not enough to make Australia’s first choice pacer in Tests

The effect was devastating as Pattinson removed Rajendra Chandrika (0), first-innings century-maker Darren Bravo (4), Marlon Samuels (3), Jermaine Blackwood (0) and skipper Jason Holder (17) to rip the heart out of the tourists’ innings. “In the second innings I was running in straight lines and I had my wrist behind the ball and it felt pretty easy,” he said.

Pattinson mentions, “It’s all got to do with my arm pass, it’s not much, but little bits I can see on video and pick up and try to change.” Pattinson said he wasn’t concerned that by moving away from his remodelled bowling action he would risk another physical breakdown which has plagued his 14-Test career. “I have gone back a little bit now. It’s hard because when you’re running in to bowl you don’t want to think about your action so I made the change to stop injuries,” he said.

Pattinson concluded,”Hopefully now that I am back in the team and I’m getting a bit older my body will hold up and I can go back a little bit to where I was when I first started playing, because that’s when I thought I was bowling at my best.” 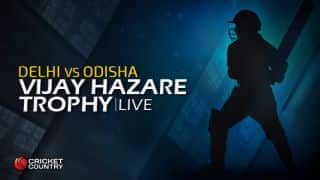