Mansoor Dar was picked up by KXIP in IPL player auction for INR 20 lakhs.

Srinagar: Manzoor Ahmad Dar of Kashmir, who was picked up by Indian Premier League‘s Kings XI Punjab emphasised that there is immense talent in the youth of Jammu and Kashmir. Dar hails from a remote village in Bandipore district of Kashmir and has become an inspiration for youngsters of the state since the day he was bought for Rs 20 lakhs by Kings XI.

The budding cricketer said he is looking forward to play in IPL with swashbuckling players like Aaron Finch, Chris Gayle, David Miller, R Ashwin, Yuvraj Singh. Dar told ANI, “IPL will be a learning path for me. IPL is the biggest league in the world. So I will get to learn a lot and will gain experience amid the international cricketers.”

“There is immense talent in the state of Jammu and Kashmir. We just need to work hard and then we can achieve anything,” he added.

Manzoor also acknowledged that the scenario of sports has changed in the current times. “Earlier when we used to go out to play, people used to say we were wandering. But now children here are practicing professionally. They are aware that they have future in sports,” he said

He also emphasised that sports should be made compulsory for students in schools as it helps them develop.

Dar said, “Sports will help students in relieving the pressure of studies and will also help them to remain physically fit.” 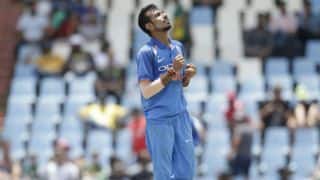 I don't mind going for runs in exchange of wickets, says Yuzvendra Chahal after maiden five-for at Centurion