The left-arm pacer is contemplating a possible back surgery which helped former fellow Australia bowler James Pattinson return to action.

As back issues continue to plague Jason Behrendorff, the left-arm Australia pacer, is contemplating a possible back surgery which helped former fellow Australia bowler James Pattinson return to action.

Behrendorff, 29, played the World Cup for Australia in England, picking up a five-wicket-haul at Lord’s following which, his stint with Sussex in the T20 Blast was cut short in August due to soreness in his back. Scans later revealed the issue was related because of a stress fracture he had suffered in the past

After being ruled out of the Marsh Cup, Pattinson, along with Cricket Australia’s medical staff are considering the option of spine surgery, which Pattinson and former New Zealand quick Shane Bond underwent. As per a report in ESPNcricinfo, the left-arm pacer is likely to get in touch with Pattinson and Bond and provided he is convinced, Behrendorff will consult Dr Grahame Inglis, who conducted a spine surgery on the two pacers.

It is to be noted that the duration of recovery after this surgery is between nine to 12 months, meaning Behrendorff will miss the T20 World Cup next year.

Besides, Pattinson and Bond, New Zealand fast bowler Matt Henry underwent the same surgery in 2012 to help revive his international career. The operation involves fusing screws and a cable made of titanium into the lower spine, which stabilises the stress fracture. Pattinson had gone under the knife in 2017, after consulting with Bond, who had the surgery way back in 2004 and it stretched his career. He went on to play till 2010.

Behrendorff made his international debut against India in October 2017 and played his last First-Class game for Western Australia a month later. With repeated back issues, the left-armer decided to keep away from FC matches to prolong and manage his workload in limited-overs. 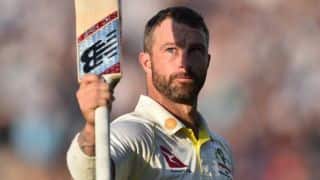