Former Australia bowler Jason Gillespie has dismissed mounting reports linking him to the role of full-time fast bowling coach in the national team.

Former Australia bowler Jason Gillespie has dismissed mounting reports linking him to the role of full-time fast bowling coach in the national team, insisting that he was happy with his stint at English county club Yorkshire. While claiming that he was not offered any job by Cricket Australia, Gillespie said he had informed Darren Lehmann, the head coach of the national team, that he will not be applying for the role, Sport24 reported. Earlier, reports began to emerge that discussions about bringing the former pacer in the national team have been going at an ‘advanced level’. Read: Glenn Maxwell confident attaining fitness ahead of tri-series in West Indies

Australia, the top-ranked Test side, have been without a full-time bowling coach since the departure of Craig McDermott following the conclusion of the World Twenty20 last month. Gillespie, who has taken 259 wickets in his 71 Tests for Australia, is currently coaching Yorkshire and is hoping to guide his side to a third consecutive county championship.

Gillespie, who held a meeting with Lehmann this week, said he had informed his ex-teammate that he was not prepared to stay away from his family at this moment and also ruled out applying for any international cricket roles. Read – Mitchell Marsh: IPL a great tournament; country will always come first

Last month, Lehmann had suggested that Gillespie would certainly be at the forefront with other bowling coaches for the vacant position. Currently, South African fast bowling legend Allan Donald occupies the post on an interim basis until the end of Australia’s tour to Sri Lanka. The team will be captained by star batsman Steven Smith. Moreover, all eyes will be on Mitchell Starc, who last played international cricket in November 2015. 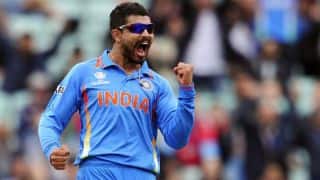