West Indies captain Jason Holder is looking forward to a ‘good test’ against world No. 1 India as they gear up for a two-Test series that starts from Thursday. And he’s pinning his hopes on legspinner Devendra Bishoo in spin-friendly conditions.

“He [Bishoo] has been around for a while and doing well,” Holder was quoted as saying by Sportstar Live on Sunday. “The conditions could favour him a bit more here. We expect him to come into play in this series and be a match-winner.”

In their last two series at home, West Indies drew with Sri Lanka and then beat Bangladesh 2-0. “We have played some really good cricket in recent times. Quite a few of our guys really stood out individually and we have to keep that collective strength. India is the No.1 Test team. They have played some good cricket despite their last series [against England]. It will be a good test for us. We have to just focus on the two Test matches, said Holder who has played 34 Tests so far.

Under Holder’s captaincy, West Indies have played 26 Tests, won 7 of them, lost 14 and drawn five. The 26-year-old has been enjoying his role as the leader. “It’s been good. Our last two Test series were very good. I don’t want to dwell too much in the past; we have a big series ahead of us, a big winter to be precise. So the focus is on that and to play good cricket.”

West Indies have been given just a two-day tour match to prepare for the Test series but Holder isn’t concerned much about it saying the camp in Dubai was enough for them acclimatise to the hot Indian conditions.

” we have just come from Dubai. We had a really good camp there. It s really hot there and we got accustomed to the heat that is similar to the one in India. We also had a practice game which went pretty well. We will utilise this two-day game the best way we can before the first Test, he said.

On the role of his fast bowlers, Holder said, “We had a good home series dominated by the fast bowlers. The conditions there are a little bit different from what we have here. The fast bowlers have to make some adjustments. It s a good opportunity for them to enhance their skills.” 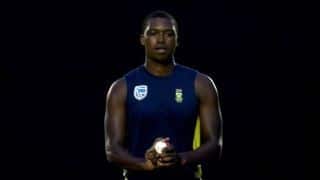