He is the first West Indian allrounder to sit at the top of the rankings since Sir Garfield Sobers.

Holder struck his maiden double-ton, an unbeaten 202, to help his side seal a crushing 381-run win at Kensington Oval on Saturday. He also picked up two wickets in England’s first innings including that of opener Keaton Jennings and captain Joe Root as the tourists were shot out for 77. (ALSO READ: We still have a long way to go – Jason Holder)

Thanks to their skipper’s marathon effort with the bat, West Indies racked up 415/6 in their second dig and then bowled out their opponents for 246.

Before the Test, Holder was ranked third behind Bangladesh’s Shakib Al Hasan and Ravindra Jadeja of India in the ICC rankings. The superb show saw him reaching career-best 440 points in the allrounder’s category as the jumped over the duo to clinch the top spot.

He also skipped 25 spots in the batting charts and is now ranked no. 33.

Other Windies cricketers to have made an upward movement include centurion Shane Dowrich who scored an unbeaten 116 and Shimron Hetmyer who scored 81 and 31.

Among the bowlers, Australian speedster Pat Cummins has replaced South African Vernon Philander at the no. 3 spot following a 10-wicket haul in the Brisbane Test against Sri Lanka.

Cummins took a career-best 6/23 in the second innings as Australia completed an innings win inside three days in the day-night Test. Debutant Jhye Richardson has entered in the rankings at no. 80.

Windies pacer Kemar Roach who took a five-wicket haul in England’s first innings, has rose to no. 20 from 25 while Roston Chase who took 8/60 in the second dig is ranked 14 (previously 28). 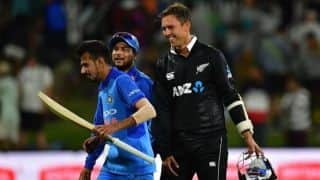